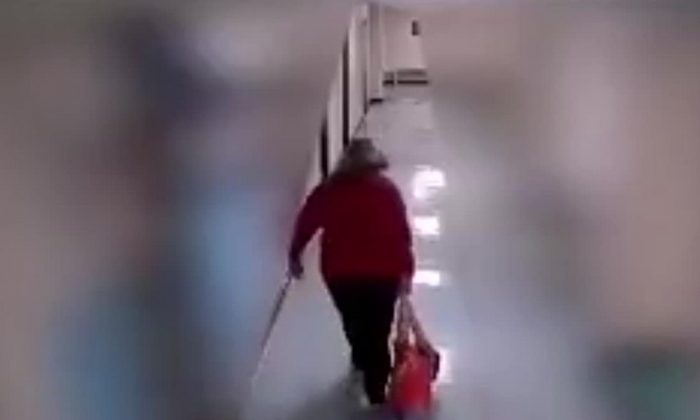 A Kentucky teacher was charged with assault on Jan. 8, after a video showing her dragging a 9-year-old boy through a school’s corridors was posted to social media.

Trina Abrams was charged with fourth-degree assault on a victim under 12 years old after an investigation of the video footage took place, according to Kentucky State Police, reported CNN.

The boy’s mother, Angel Nelson, posted the school’s video surveillance to Facebook on Jan. 6, asking for the public for “help and advice.” The video showed Abrams dragging the boy, who Nelson said has been diagnosed with autism, ADHD, PTSD, anxiety, and depression, by the wrist through the school hallways. The boy could be seen lying on his back or knees.

“We as parents trust teachers and school staff on a daily basis to help teach and help our children succeed. We should never have to worry about anything like this ever happening,” she wrote in the post.

The incident occurred in October last year at Wurtland Elementary school in Greenup County. According to Nelson, Abrams forcefully grabbed the boy’s wrist and bent it back while he was experiencing a breakdown. After the child let go of his chair, the teacher then removed him from the classroom. The boy told his mother than the teacher had thrown him hard down onto a chair in front of several of his classmates.

“Beyond this, we will never truly know what took place behind that closed door because of my son’s speech limitations,” she wrote. “This incident was violent enough to not only injure my child but to also destroy his shoes.”

“It is my belief that all schools should be required to have cameras in place (that can not be turned to a corner) in order to protect students and teachers,” the mother added.

Nelson said as a result her son suffered a sprain in his left wrist, which started swelling and bruising the days following. She added that her son will require occupational therapy to regain his fine motor skills like handwriting, buttoning pants, and tying shoes.

“This has also emotionally traumatized him,” she said. “My son deserves justice. I feel as though Mrs. Abrams should be held accountable for her actions.”

In a more recent post, Nelson said her son needs to be able to go to school and know that it’s a safe place to be.

“He deserves the highest quality education America can offer him with teachers specialized to care for his needs. Every child deserves this. [He], unfortunately, may not have been the first child to have been injured by a school staff member, but let’s take the necessary steps towards making him the LAST,” she said in the post.

Meanwhile, Nelson said teachers should be given more training to hand children with disabilities.

Greenup County Schools Superintendent Sherry Horsley told WSAZ-TV in a statement that teachers in the county are trained to prevent incidents of restraint and are “specially trained to address autism-related behaviors.” She added that the teacher involved has been removed from the school. But did not identify Abrams or her position.

“The Greenup County School District prioritizes the safety of our students. The district followed established safety protocol as soon as this situation became known,” the statement said.

Last year, an Ohio teacher was fired after she was photographed dragging a student by the arm down a school hallway.