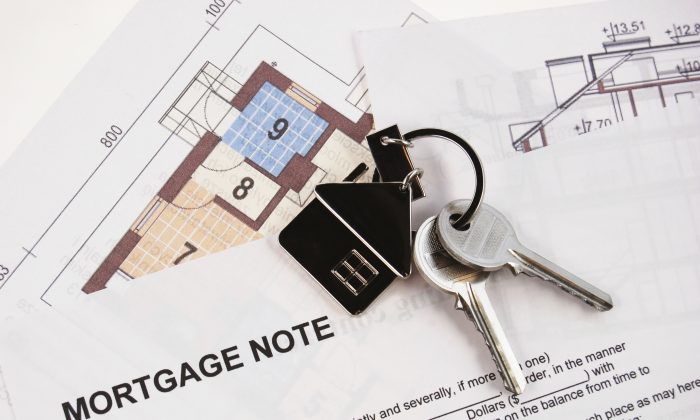 Fixed-rate, five-year mortgages (a popular choice for Canadian homeowners) are hovering around 3.5 percent and variable mortgage rates (based on a floating rate based on prime) around 2.5 percent. (Epoch Times)
Canada

TORONTO—Another big Canadian bank has lowered some of its mortgage rates slightly after an initial reduction by the Royal Bank over the weekend.

TD Canada Trust (TSX:TD) now has a posted discounted rate of 3.69 percent for its five-year fixed mortgages, down from the rate of 3.79 percent that had been in effect since August last year.

The bank has also made changes to several of its other closed rates.

TD said in a an email that it reviews its rates on an ongoing basis to “remain competitive and provide our customers with flexible mortgage options and the right rate to meet their individual needs.”

The move comes after RBC lowered its rates on several fixed-rate mortgages over the weekend by 10 basis points, bringing its special offer five-year closed rate to 3.69 percent.

Scotiabank lowered its discounted five-year closed fixed-term mortgage 10 basis points to 3.49 percent on its website Tuesday, down from 3.59 percent posted on the site Monday.

BMO, meanwhile, lowered a number of its rates between 10 and 20 basis points, including its discounted five-year fixed rate to 3.69 percent from 3.89 percent.

The changes came before the Bank of Canada said on Wednesday that it was keeping its key interest rate unchanged at one percent, maintaining a neutral stance on whether it plans to raise or lower the rate from where it has been for more than three years.

The central bank said that while it sees improvements in the Canadian economy, inflation is now expected to be lower than previously projected.

Experts had predicted earlier this week that other lenders would likely follow RBC in reducing rates, but noted the changes represent relatively small drops in an already low interest rate environment and should therefore not be a major consideration for home buyers.

“It’s got more to do with what the finance minister and the department of finance will do vis-a-vis making it harder to qualify for a mortgage if they don’t like the fact that rates are low and they’re concerned about a possible housing bubble.”

According to Scott, a small change in rates isn’t likely to have a huge impact on homebuyers at a time when rates are already so low, with fixed-rate, five-year mortgages (a popular choice for Canadian homeowners) hovering around about 3.5 percent and variable mortgage rates (based on a floating rate based on prime) around 2.5 percent.

Andrew Bodnar, a real estate salesman with Re/Max Condos Plus Corp. brokerage in Toronto, said the government already tightened regulations around qualifications for mortgages earlier this year, adding he would be surprised to see any dramatic moves in interest rates.

“It’s fairly steady right now and there are natural forces of supply and demand going on,” Bodnar said.

“Canadians are pretty conservative. Most people don’t have a new car with a big payment and they’re also [not] looking to buy a house that’s well outside their bounds.”

And in the end, Scott said, homeowners trying to get a sense of how rates will impact their mortgage payments would be better served by keeping an eye on the strength of the U.S. economy and changes in bond markets—factors that tend to have a greater impact on interest rates than any incremental change by one lender.

“In the grand scheme of things, minor variations of interest rates are not that critical,” he said. “What’s more important is getting the right mortgage for that person’s situation.”