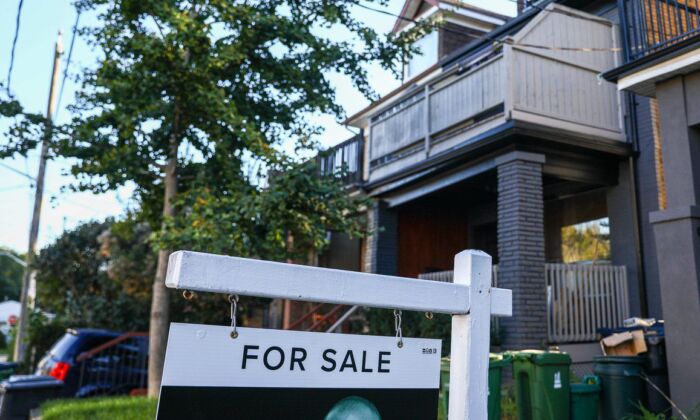 A for sale sign is displayed in front of a house in the Riverdale area of Toronto on Sept. 29, 2021. (The Canadian Press/Evan Buhler Evan Buhler)
Canada

A new TD Bank report suggests the average price of a home in Canada could fall between 20 and 25 percent from its peak seen earlier this year to the first quarter of 2023.

The report released Monday comes as a decrease in prices materialized in the summer as mortgage and interest rates rose. Many are expecting the drop to continue well into fall and even winter.

The report’s projected price drop represents an unprecedented decline at least going as far back as the late 1980s, when the data began, but it follows an unequally unprecedented rise during the pandemic, TD economist Rishi Sondhi wrote.

“Our forecasted decline in national home prices would only partially retrace the 46 percent run-up over the course of the pandemic,” said Sondhi.

“As such, our forecast can be more aptly described as a recalibration of the market, instead of something more severe.”

Sondhi says worse effects will likely be avoided because of several factors that will help cushion housing demand and prices—the fastest rate-hike cycle in decades, growing consumer incomes and excess savings and low inventories in the new and resale markets.

Sondhi’s pricing forecast is in line with one made by a trio of Desjardins economists. They expected the average national home price to fall by 15 percent between its February high – $817,253 – and the end of 2023, but adjusted their forecast in August to predict a drop between 20 and 25 percent.

In Toronto neighbourhoods like the Beaches and Leslieville, she’s found prices have already fallen by 10 percent.

“The really smart buyer is jumping on the opportunity, but some buyers are thinking like a lot more … it’s going to go down a lot more,” she said.

She sees this period as a “reset,” especially for sellers accustomed tobidding wars and soaring prices while the market was on a tear during the pandemic.

Sondhi’s report also estimated the number of home sales will fall 35 percent by the first quarter of 2023.

“Our forecasted peak-to-trough decline in Canadian home sales falls well within the range seen in past housing downturns and was surpassed by the global financial crisis sales tumbled by 38 percent,” Sondhi wrote.

In the long term, TD remains positive on the outlook for housing because it predicts population growth should remain healthy, underpinning fundamental demand for housing.