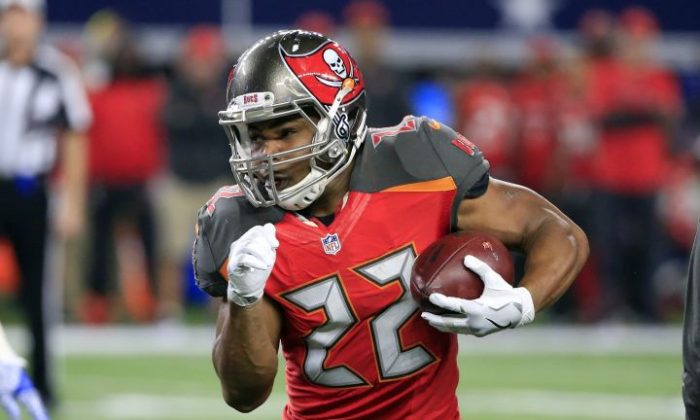 This Dec. 18, 2016 photo shows Tampa Bay Buccaneers' Doug Martin (22) carrying the ball in the first half of an NFL football game against the Dallas Cowboys in Arlington, Texas. Martin has been suspended four games for violating the NFL's policy on performance enhancing substances and said Wednesday, Dec. 28, 2016 he's entering a treatment facility rather than appeal the ban. (AP Photo/Ron Jenkins)
NFL

Tampa Bay running back Doug Martin has been suspended four games for violating the NFL’s policy on performance-enhancing substances and said Wednesday he’s entering a treatment facility rather than appeal the ban.

The two-time Pro Bowl selection, slowed by a hamstring injury this season after rushing for 1,402 yards in 2015, will miss Sunday’s regular-season finale against Carolina.

According to ProFootnallTalk, Martin tested positive for Adderall, a prescription drug that contains a combination of amphetamine and dextroamphetamine used to treat narcolepsy and ADHD. It is considered a performance enhancing drug by the NFL due to its ability to make users focus.

“I was notified last week of a four-game suspension for violating the league’s drug policy,” Martin said in a statement, ESPN reported. “My initial instinct was to appeal the suspension and finish the season with my teammates. However, after numerous discussions with people close to me—including Coach [Dirk] Koetter—I am starting the suspension immediately so I can enter a treatment facility and receive the help I truly need.

He also sat out last week’s 31-24 loss at New Orleans after being declared inactive against the Saints, though that game won’t count against the penalty.

The 27-year-old running back was excused from practice Wednesday.

Afterward, Koetter declined to comment on his situation, saying a statement from the player would be forthcoming.

The NFL said Martin was suspended for the team’s “next four regular-season and/or postseason games,” beginning immediately.

“Doug has been a valued member of our organization for the past five seasons and we respect and support his decision to seek help,” Bucs general manager Jason Licht said.

“Right now, he is working through issues that are much larger than the game of football,” Licht added.

“Our primary concern is that he takes this time to focus on getting the help that he needs in order to move forward with his personal and professional life.”

The announcement came four days after the Bucs declared what Koetter described as a healthy Martin inactive for a game Tampa Bay needed to win to retain realistic playoff hopes.

Although the loss at New Orleans did not eliminate the team from contention, seven things need to have to happen on the final day of the regular season this weekend — beginning with Tampa Bay winning at home against Carolina — for the Bucs to earn the remaining NFC wild-card berth.

Martin injured his hamstring during a loss to Arizona in Week 2 and was sidelined nearly two months before returning against the Chicago Bears on Nov. 13.

Although, the two-time 1,000-yard rusher never regained the form that helped him finish second in the league in rushing behind Adrian Peterson last season, the Bucs rattled off five consecutive victories — beginning with a 26-point win over Chicago — to climb into contention for the club’s first playoff berth since 2007.

Martin averaged just 2.9 yards per carry while rushing for 421 yards on 144 attempts this season.

He finished with a team-leading three rushing touchdowns, however his yards per attempt average is the lowest among NFL runners with at least 100 carries.