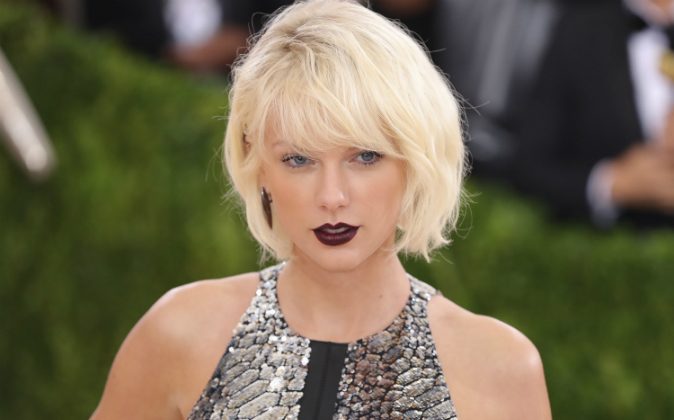 Taylor Swift attends the 'Manus x Machina: Fashion In An Age Of Technology' Costume Institute Gala at Metropolitan Museum of Art on May 2, 2016 in New York City. (Neilson Barnard/Getty Images for The Huffington Post)
Entertainment

Taylor Swift continues to give fans a peek into her life offstage.

In a newly released Apple Music commercial on May 12, Swift “dances like no one is watching” throughout her home.

The clip begins with Swift saying she “loves a quiet night at home” but then ironically turns on “I Believe In a Thing Called Love” by British rock band, The Darkness. Clad in a burgundy crop top, high waisted black pants, black blazer, and leopard-print ankle boots, the songstress jumps up and down—even on some furniture—as she lip-syncs to the 2003 single.

“Can’t explain all the feelings that you’re making me feel/My heart’s in overdrive and you’re behind the steering wheel,” lip-syncs the 26-year-old as she steers an imaginary steering wheel.

The songstress continues to rock out with a few high kicks, jumps, and flailing arms while singing about love—a feeling she knows particularly well.

Swift is currently in a relationship with Calvin Harris.

“I’m just taking things as they come,” the “Bad Blood” singer said about Harris in an interview with Vogue. “I’m in a magical relationship right now. And of course I want it to be ours, and low-key … this is the one thing that’s been mine about my personal life.”

This is just the latest Apple Music commercial for the highest-paid musician.

She battled a treadmill while rapping along to Drake—also an Apple affiliate—and Future’s “Jumpman” off the album, “What A Time To Be Alive” in the advertisement released April 1. A few weeks later, in another commercial, she used her lipstick as a microphone to lip sync the lyrics to Jimmy Eat World’s “The Middle” and air guitars around in her bathroom.

As for English band, The Darkness, this is the second time its song, “I Believe In A Thing Called Love” has been used in a commercial. The song was featured in a 2012 commercial during Super Bowl XLVI, for the Samsung Galaxy Note.