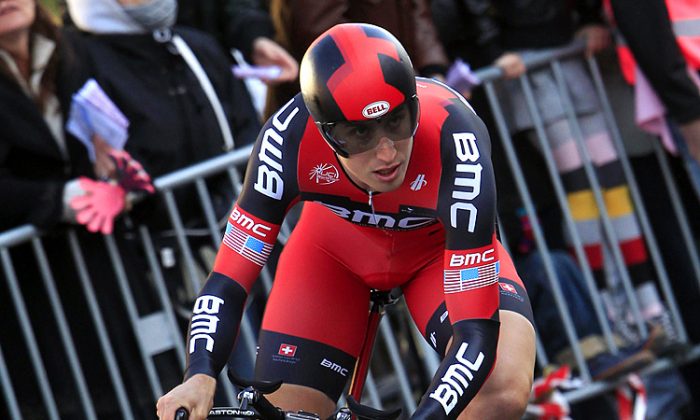 Taylor Phinney Wins Stage One of the Giro d’Italia

Phinney, whose father is famous American cyclist Davis Phinney and his mother gold-medal Olympic cyclist Connie Carpenter, showed his breeding by beating the best cyclists in the world on the short, flat time trial course.

This was the young American’s first Grand Tour stage win; he won the Under-23 Paris-Roubaix in early April, but Sunday he beat the big boys.

The 21-stage Giro d’Italia is the first of three Grands Tours, along with the Tour de France in July and the Vuela a España in September. These are the greatest test of cyclists, and wins in these races mean more than wins almost anywhere else.

Young Taylor Phinney isn’t likely to hold the pink jersey for more than a couple of days, but he will treasure the memory for the rest of his live.

Phinney has huge potential as a time trailer and possibly eventually as a General Classification contender, but so far it is in time trials that he has shone brightest.

The Tour of Italy oddly opened in Herning, Denmark for the first two stages and a third in Horsens, Denmark before a rest day Tuesday. Then the Giro heads to Verona Italy for a team time trial and the rest of the race.

Stage Two will be a flat 206-km jaunt starting and finishing in Herning—a day for the sprinters. Stage Three, 190 km and almost as flat, will again almost certainly end with a bunch sprint.