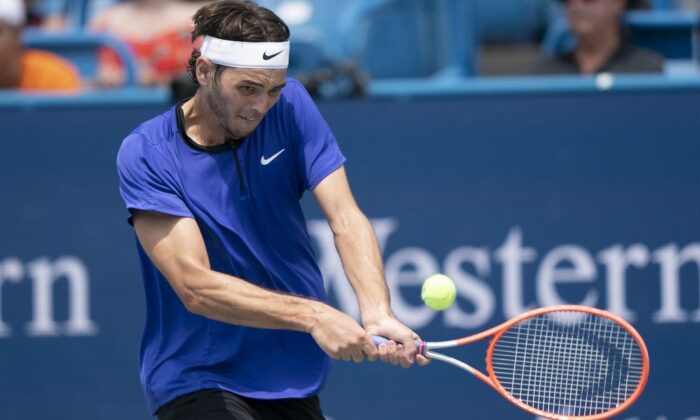 Taylor Fritz (USA) returns a shot during his match against Andrey Rublev (RUS) at the Western & Southern Open at the at the Lindner Family Tennis Center in Mason, Ohio, (Susan Mullane/USA TODAY Sports via Field Level Media)
Tennis

Taylor Fritz recorded 44 winners and saved all six break points en route to a 6–7 (4), 6–2, 7–5 win over sixth-seeded Andrey Rublev on Thursday to reach the quarterfinals of the Western & Southern Open at Mason, Ohio.

Fritz, the 11 seed, delivered 13 aces while earning a showdown with top-seeded Daniil Medvedev. He overcame 26 unforced errors and six double faults to slay Rublev of Russia at the Cincinnati-area event.

“I felt at times my serve rhythm was going away, but I just didn’t want to go a break down in the second set,” Fritz said afterward. “I tried to hit some good serves, take some more risks. I thought at the end of the first I was too passive. So I told myself to take chances (in the second set).

“It was a big match. I wasn’t going to let anything really bother me or affect me to where it might affect me to lose the match. Every time something didn’t go my way, I tried to analyze it and think about what to do next time to try and win the point.”

Rublev registered 16 aces but the failure to convert any break points hurt him. He had 32 winners against 26 unforced errors.

Medvedev advanced with a 7–5, 7–5 victory over Canadian Denis Shapovalov.

The Russian had a 27–22 edge in winners but committed just 19 unforced errors to Shapovalov’s 29. Shapovalov was able to stay in the match due to saving 10 of 13 break points.

“The match was pretty tight,” Medvedev said. “I felt that it was a great level. I felt that he was missing a bit more than me but making more points, but that is how Shapo plays.

“My goal was to stay there every point possible and try and put pressure on him when I had the chance. But there were many points where I was just running across the baseline, trying to get back his shots.”

Croatia’s Borna Coric hammered 16 aces while defeating 15th-seeded Roberto Bautista Agut of Spain 6–2, 6–3. Next up for Coric is seventh-seeded Felix Auger-Aliassime of Canada, who was a 2–6, 7–6 (1), 6–1 winner over 10th-seeded Jannik Sinner of Italy.