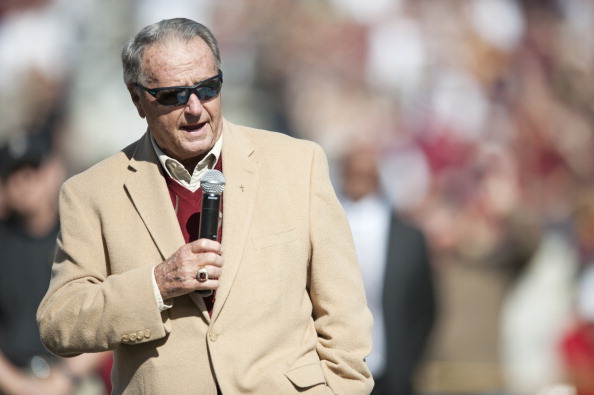 Bobby Bowden talks to a loving crowd before the pre game against the North Carolina State Wolfpack at Doak Campbell Stadiumon October 26, 2013 in Tallahassee, Florida (Photo by Jeff Gammons/Getty Images)
US

Bowden, 23, was discovered inside an upside-down car that was submerged in the water near Country Club Road South in Winter Haven, Fla.. The car broke through a wood fence after it hit an embankment, WTSP reported.

Rafael Fernandes de Auguiar-Valini, 25, was the driver of the vehicle, reported The Ledger.

Bowden was the deceased front-seat passenger.

Officials said that only one vehicle was involved in the crash.

The crash took place at around 2 a.m. on Thursday after three men were drinking at the Indigo Bar on U.S. 17. The crash occurred as they were going to a friend’s house, reported TampaBay.com.

After about four hours of trying to remove the bodies from the car, divers said they found signs of life. Drivers then pulled Robert Lewis Edwards, 22, out of the crash. He was being treated for hypothermia and other injuries on Thursday evening.

Deputies said that Edwards was only partly lucid as of Thursday night.

“One person had a very fortunate Christmas,” Polk County Sheriff Grady Judd said Thursday, adding that “the other two, not so much.

Other details of the accident are still being investigated.

However, the sheriff’s office says that alcohol appears to be a factor, reported The Associated Press.

Bowden is the son of former FSU assistant coach Jeff Bowden, who is a coach in Akron.