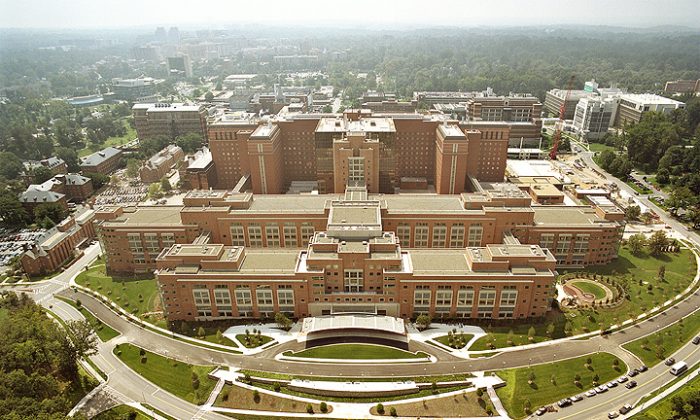 Aerial photograph from the north of the Mark O. Hatfield Clinical Research Center on the National Institutes of Health in Bethesda, Md., in 2008. (NIH, Public Domain)
Opinion

Like your iPhone? Federal officials designed it. Couldn’t live without the Internet? Thank Uncle Sam—he invented it. Sick and need a new medicine? Don’t worry—the government is here to help.

This fantastical line of thinking—that because the government funded basic, early-stage research, it can claim credit for a final product decades later—underpins the latest calls for more federal control of drug prices. Such calls are grossly ill-informed and demonstrate a deep misunderstanding of the drug development process.

The latest calls for more federal control of drug prices are grossly ill-informed and demonstrate a deep misunderstanding of the drug development process.

And if lawmakers listen to them, they could prove deadly.

With rare exceptions, the National Institutes of Health (NIH) doesn’t create new medicines, nor does the government cut checks to pharmaceutical companies. Less than 10 percent of all new drugs—and less than 20 percent of the most innovative “priority-review” drugs—are patented by public-sector developers.

Instead, the NIH funds and conducts important but extremely early-stage scientific research that may prove useful—or may not. For instance, NIH researchers might seek to discover the structure of a protein found in the brains of Alzheimer’s patients. They’re not looking to create a medicine—just to better understand the possible cause of a disease.

Sometimes, the NIH’s research points the way to potential avenues of treatment.

Small biotech startups are particularly good at this sort of technical work. But they often lack the financial wherewithal to conduct giant clinical trials and navigate the tremendously expensive, distressingly complex, and lengthy process that leads to final FDA approval. Large biopharmaceutical companies can provide that kind of support, which is why the biggest pharmaceutical companies constantly purchase startups.

But even this later-stage research and testing is far from a fait accompli. Many pending drugs are removed from development or clinical trials when they don’t meet expectations.

Despite such setbacks, the pharmaceutical development system is working. In recent years, U.S. firms have produced over half of the world’s new prescription drugs.

Drug development is a symbiotic chain, with each link—the NIH, the smaller biotech firms, and the large biopharmaceutical companies—supporting each other.

Federal interference in drug pricing, such as through the price caps and controls, would break this chain. Indeed, a National Bureau of Economic Research study concludes that reducing drug prices by 40 to 50 percent will cause new early-stage R&D projects to decline by 30 to 60 percent.

If biopharmaceutical companies can’t earn a return on their investments, they won’t invest in the research or clinical trials that yield new drugs. That means fewer new treatments.

If lawmakers opt for short-term savings via price controls, America will lose its preeminence in biopharmaceutical research, and patients will lose out on dozens of new medicines that are never created and that provide hope and cures for diseases for patients now and in the future. That’s one disaster the government would be able to take credit for.