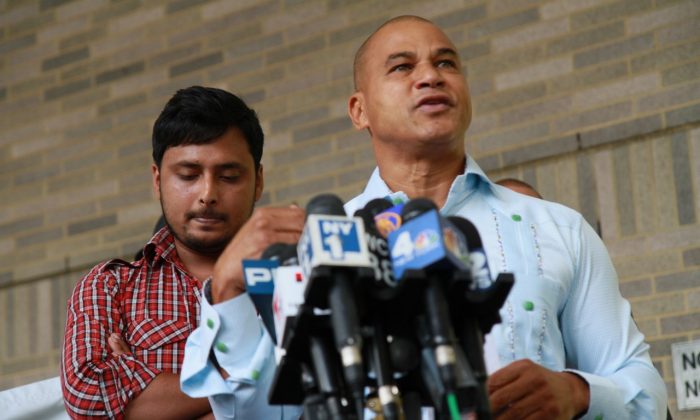 Faysal Kabir Mohammad Himon, the driver involved in a gruesome accident that severed a British Tourist's foot stands beside Fernando Mateo, head of the New York State Federation of Taxi Drivers, outside Bellevue hospital, on Aug. 23 where Sian Green, the woman who lost her leg in the accident, is being treated. (Ivan Pentchoukov/Epoch Times)
New York

NEW YORK—If it was up to Fernando Mateo, all bicyclists in New York City would have to get licenses and license plates, be subject to a bicycle ban if they committed too many violations, and be required to carry insurance.

Mateo, the head of the New York State Federation of Taxi Drivers, called for these changes at a press conference outside Bellevue Hospital where Sian Green, a British tourist who lost her leg in a gory Aug. 21 taxi accident, is being treated.

A yellow taxi driven by Faysal Kabir Mohammad Himon, struck Green after a bicyclist banged on the back and the side of the taxi, causing Himon to panic and accelerate. The bicyclist has been arrested 22 times and is representative of a group of bicyclists who Mateo called “reckless” and “aggressive.”

“We know that they’re reckless, yet we’ve done nothing about it,” Mateo said.

Mateo said that he hoped to have the support of City Council Member Ydanis Rodriguez and State Sen. Adriano Espaillat to sponsor the bills at the city and state level.

Mateo did not deny that cab drivers are known for aggressive road behavior, but said that taxi drivers had a right to be on the road, while bicyclists did not. It is unclear what the legislative source of Mateo’s statement was, because, with few exceptions, the New York state charter treats bicycles the same as motorized vehicles.

On the other hand, the taxi was the vehicle that severed Green’s foot, and Himon hasn’t been charged with a crime as of yet.

Paul Steely White, executive director of Transportation Alternatives, a group that advocates for walking, bicycling, and public transit in New York City, said in a statement that the Taxi and Limousine Commission should revoke Himon’s license to drive a taxi.

A commission spokesman said that the commission has taken the initial steps in suspending Himon’s license.

Councilman Peter Vallone (D-Queens) told the New York Daily News that Himon could have been charged with reckless endangerment.

“The police virtually never charge a driver who caused a serious accident with a crime,” said Vallone. “They have the crime of reckless endangerment (on the books) and yet they never use it.”

“I don’t know the fact of this case, so I’m not out there saying this guy needs to be charged, but this seems like an example of a case where charges would be appropriate.”

See photos of the accident scene below.

CORRECTION: Epoch Times reported that Mateo had the support of City Council Member Ydanis Rodriguez and State Sen. Adriano Espaillat, who would introduce bills at the city and state level to get licenses and license plates for bicyclists. Mateo did say that he hoped to have the council members’ support to draft legislation. Epoch Times regrets the error.