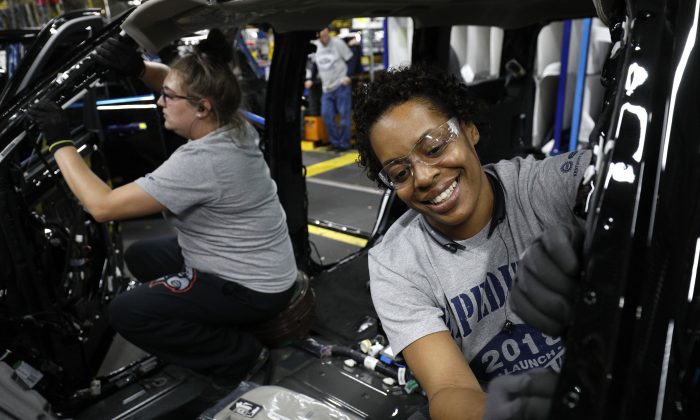 Ford workers Jasmine Powers (right) and Cassie Bell (left), both of Louisville, Kentucky, install visors into the 2018 Ford Expedition SUV as it goes through the assembly line at the Ford Kentucky Truck Plant in Louisville, Kentucky in Oct. 27, 2017. (Bill Pugliano/Getty Images)
Politics

The new tax law will expand the GDP by more than $5 trillion over the next decade, expert says
By Emel Akan

WASHINGTON—The full benefits of tax cuts will take years to realize, but the reductions already have helped spur business investments, as well as economic growth and wages, according to experts.

The gross domestic product (GDP) climbed above 4 percent in the second quarter and wages finally started to rise, after having lagged behind job growth. In August, average hourly earnings increased by 2.9 percent on an annualized basis, the fastest pace since the recession.

According to Scott Hodge, president of the Tax Foundation, the effects of tax cuts won’t be just short-lived.

“It’s unrealistic to expect major tax policy changes like this to produce immediate results,” he said in his testimony at a Senate hearing on Sept. 6 titled “The Positive Economic Growth Effects of the Tax Cuts and Jobs Act.”

The bill is expected to help the economy grow, resulting in more jobs and even higher wages, he said.

According to the Tax Foundation, the new tax law will boost the level of GDP by 1.7 percent over the next decade.

“Now, it doesn’t sound like much, but that translates into a cumulative $5.3 trillion worth of additional GDP over the next decade,” Hodge said, adding that tax reform also is expected to boost wages by 1.5 percent and create 340,000 additional full-time jobs.

If the Congress were to make the expensing provision and the individual rates permanent, the economic benefits would be considerably higher, he said.

The new tax code slashes the corporate income tax rate to 21 percent from 35 percent. It also has a temporary expensing provision that allows businesses to immediately deduct 100 percent of the cost of certain investments.

The expensing provision will begin to phase out at the end of 2022 and many individual tax provisions will expire by the end of 2025, according to the new code.

Thanks to tax cuts and the expensing provision, businesses have accelerated their capital spending. Nonresidential fixed investment, which includes spending on equipment, structures, and intellectual property, climbed 8.5 percent year-on-year during the second quarter.

Workers also benefit from a surge in capital investment, according to experts, since wages are closely tied to business investments and productivity gains.

While only eight months have passed since the Tax Cuts and Jobs Act became effective, Minnesotans are already reaping the benefits of the bill.

The state saw strong employment growth that began with the passage of the legislation, said John Hinderaker, president of the Center of the American Experiment, a public-policy organization from Minnesota.

It’s the biggest jobs gain in at least a decade, Hinderaker said in his testimony.

Wage growth has also started to take off in Minnesota. Average weekly earnings have risen by 2.7 percent since January, more than doubling the 1.2 percent increase in the same period last year, he explained.

“In only six months, we have seen significant wage increases, which if you annualize it adds up to $1,200 per year. That’s a big chunk of the $4,000 in just six months,” Hinderaker said.

Republicans have repeatedly said that changes in corporate tax law will, over the next few years, boost the median wage by $4,000 a year.

Critics, however, have doubts about the positive effects of the legislation, given the nation’s large budget gap and soaring debt. According to the Congressional Budget Office, tax law is projected to increase the national debt by $1.9 trillion over the next decade.

A recent study by the International Monetary Fund (IMF), which examined countries across the globe over the past few decades, however, found that cutting spending was the most successful policy toward reducing deficits and boosting economic growth. Raising taxes weighed on growth, and ended up being counterproductive to cutting deficits, the IMF study showed.