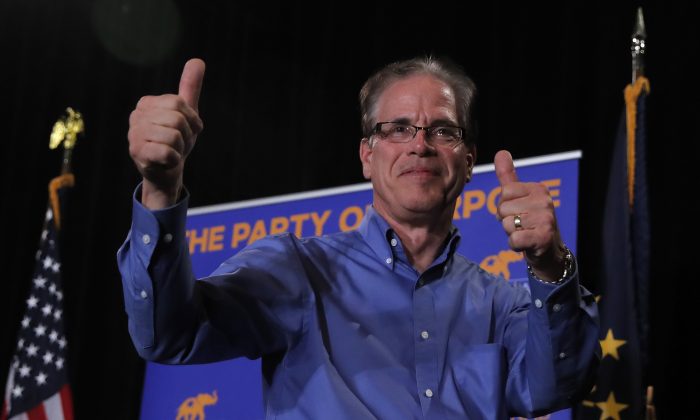 WASHINGTON—Generous tax-funded pensions for members of Congress would be abolished under a proposal introduced in the Senate on Feb. 12 by two Republican freshmen senators, Mike Braun (R-Ind.) and Rick Scott (R-Fla.).

“It’s time we make Washington more like the private sector and the best place to start is to end taxpayer-funded pensions—like Nancy Pelosi’s six-figure annual pension—that senators and congressmen are entitled to in retirement,” Braun said in a joint news release.

“If we remove the luxurious perks from Congress, we’ll get better leaders: That’s why I’ll never accept my Senate pension and, if forced to, I pledge to donate every penny to Hoosier charities.”

Scott, who also defeated a Democratic incumbent in 2018, long-serving Sen. Bill Nelson, linked the pension proposal to another populist standard, limiting terms for members of Congress, as a means of ending career politicians.

“It’s time for term limits and it’s time to make those in D.C. realize that the era of career politicians is over. Americans should not have to foot the bill for generous salaries and pensions for members of Congress, and I’m proud to be working on common-sense solutions to make Washington work for families across the nation,” he said in the release.

All current members of Congress would be grandfathered, meaning the first freshmen to be covered by the proposal if it becomes law would be elected in 2020.

Scott spokesman Chris Hartline said the Florida senator plans to donate his entire salary and, like Braun, any tax-funded pension he may receive to charity.

Congressional pensions are far more generous than those in the private sector for three reasons—they are defined benefits that pay a percentage of the former senator or representative’s final annual salary until death, they are adjusted for inflation annually unless Congress specifically votes not to do so, and the members themselves set their compensation levels, subject only to voters.

Senators and representatives are currently paid $174,000 annually, except for the Speaker of the House, who receives $223,500. Also, the Senate’s President Pro Tempore, as well as the majority and minority leaders of the Senate and the House, are paid $193,500, according to the Congressional Research Service (CRS).

If House Speaker Nancy Pelosi retired in 2019, her tax-funded pension would be $178,800 annually.

The net median income of a member of Congress was just over $1 million, according to opensecrets.org in 2015, with little change in the years since then.

Under the Braun/Scott proposal, senators and representatives would only have Social Security, their contributions to the Thrift Savings Plan of FERS, and other retirement savings accumulated prior to entering public service.

“There were 611 retired Members of Congress receiving federal pensions based fully or in part on their congressional service as of Oct. 1, 2016.

Most private sector pensions are defined contribution programs that base benefits to be paid on how much the individual employee contributes, sometimes with a small percentage match by the employer.

Cost-of-living adjustments are rare in the private sector.

Initial reaction to the Braun/Scott proposal was mixed Feb. 12.

R Street Institute Vice-President Kevin Kosar, for example, showed little enthusiasm for it, telling The Epoch Times that “nixing legislators’ pensions may well increase the incentives they have to serve in Congress for a short time and then flee to K Street to be big-earning lobbyists.”

Similarly, Americans for Limited Government President Rick Manning thinks “it is a fine idea, but I have little expectation that it would make much of a difference in the makeup of the Senate, other than perhaps causing a few of the members to cash out to K Street out of financial need when they hit their early 60s.”

Manning, who was a senior Department of Labor political appointee during the second Bush presidency, told The Epoch Times that Braun’s rejection of a tax-paid pension will add to his credibility because “private multi-employer pension issues, like the Teamsters Central States Pension Fund,” that are approaching “insolvency are likely to confront Congress in the next two years.”