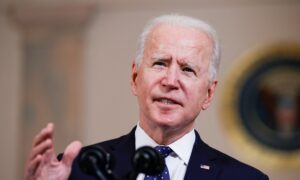 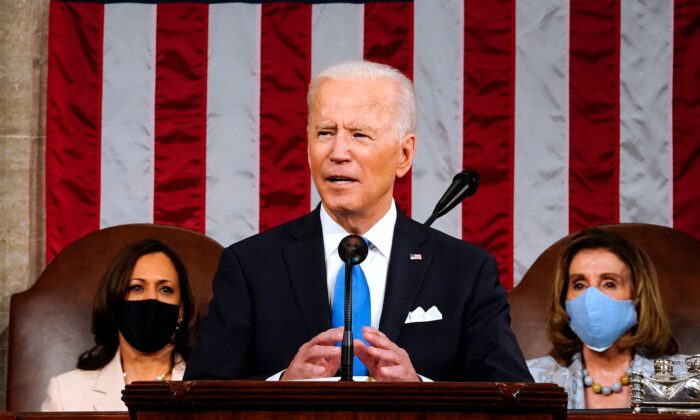 President Joe Biden, flanked by Vice President Kamala Harris (L) and Speaker of the House of Representatives Nancy Pelosi (R), addresses a joint session of Congress at the US Capitol in Washington, on April 28, 2021. (Melina Mara/Pool/AFP via Getty Images)
Executive Branch

Tax Hike in New Proposal Only for Couples Making More Than $509,000: White House

President Joe Biden’s proposal to increase taxes to pay for school for some would affect couples making more than $509,299 according to a White House official.

“Consistent with the President’s campaign proposal, we are proposing to reverse the tax cut for the top bracket by returning that top tax bracket to what it would’ve been under pre-2017 law. That applies to less than 1 percent of Americans—the very top earners,” a White House official told news outlets in a statement.

The clarified numbers are for the tax hike Biden proposed in his $1.8 trillion American Family Plan.

The White House fact sheet on the proposal says no Americans making $400,000 per year or less would see their taxes go up.

Biden has also claimed before, including on the campaign trail, that he would not raise taxes on people making that much or less annually.

“I will not impose any tax increase on people making less than $400,000,” he told a joint session of Congress on Wednesday.

But the new numbers show that’s not true if they are part of a married couple.

“The president’s pledge stands—if you are an American individual or family earning less than $400,000, you will not see a dollar increase in your taxes,” the official said. “And in fact, for the top bracket, it’s actually a little higher than that.”

Biden is seeking to reverse some key provisions in the 2017 tax cuts bill that were passed by Congress and signed into law by former President Donald Trump.

The income level is adjusted by year and has climbed since then.

Biden’s proposal would hike the top rate back up to 39.6 percent.

It would also end what the administration describes as capital income tax breaks and “other loopholes for the very top.”

An actual bill detailing the proposal has not yet been released.

In another proposal that has not yet been passed, Biden wants to raise the corporate tax rate by 7 percent to 28 percent.

Republicans have pushed back on the proposals, crediting the tax cuts bill with stimulating economic growth.

“The last thing we need to do is change the tax policies that were getting us to this great wave of job creation,” Sen. Roger Wicker (R-Miss.) said in a video statement on Thursday.