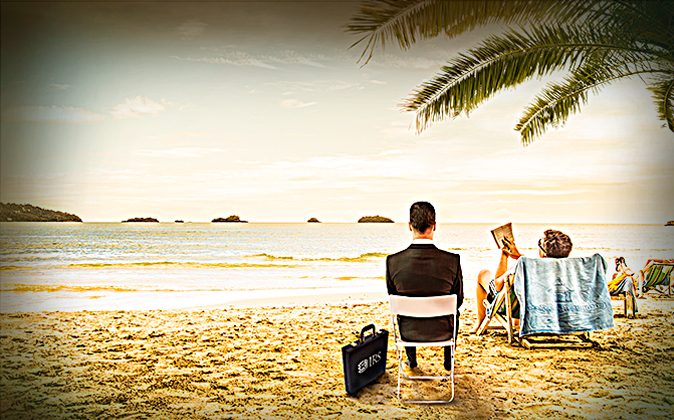 The Panama Papers and the revelation of the offshore financial activities of countless celebrities, current and former government officials, and sports personalities make tax havens, tax avoidance, and tax evasion look like they are getting bigger. They aren’t.

In fact, the Panama Papers show that it is becoming more and more difficult to hide behind a shell company and avoid paying taxes in the United States or other high-tax countries.

No Legal Way to Avoid Taxes

Let’s start with the basics. There is practically no legal way for a U.S. citizen to avoid paying U.S. taxes, even if this income is somehow connected to a shell company in a low-tax jurisdiction, or tax haven.

“There is a doctrine under U.S. law that’s called ‘assignment of income doctrine.’ The person who earned it has to pay tax on it,” said Mark Leeds, a partner at the law firm Mayer Brown. This is true for any kind of income, whether it comes from investments or wages.

He also noted that this is different for corporations that themselves earn active income. Active income earned through a non-U.S. corporation still has the possibility to avoid U.S. taxes for revenue generated abroad, at least until the money is brought back home.

So if you have to pay U.S. taxes anyway, and assuming you don’t want to break the law, what’s the point of having money stashed away on the Cayman Islands, for example?

It has everything to say about human nature. Taxes are expensive, running a government is expensive.
— Mark Leeds, Mayer Brown

“A lot of these foreign jurisdictions offer better legal protection if you get sued,” said Leeds.

In other words, if you owe money in whichever way or form, it’s going to be harder to confiscate your assets in the Cayman Islands than from the island of Manhattan, even if everybody knows that they are there.

“Asset protections trusts formed under the laws of certain non-U.S. jurisdictions can offer a significant degree of protection for high-net-worth individuals,” said Leeds.

However, this added benefit is only part of the story. Previously you could hide away money or income in a tax haven illegally, and there was a very small chance that anybody at the IRS would ever know about it.

“The reason you could hope to not pay tax was because there was no information reported to any tax authorities. Panama wasn’t complying with the initiatives to prevent this from happening,” said Avi-Yonah Reuven, a professor of law at the University of Michigan.

Even up until 10 years ago, it was relatively easy to transfer money earned or invested in the United States out of the country to avoid taxes mostly on investment income and capital gains without the IRS knowing about it.

If you wanted to be extra sure that nobody could trace your move, you would use the proverbial suitcase full of cash, gold, or diamonds, like the “Wolf of Wall Street.”

Other income may have been earned outside the United States and then transferred, which again makes it difficult to trace.

Put the money in a bank account in Panama or the Cayman Islands owned by a shell company that you control—but nobody knows you do—and invest it in the United States or Europe or anywhere else, and not pay tax on dividends or capital gains.

“They are not going to have the relevant information as to who owns these companies. This is all illegal. Unlike what some companies like Amazon and Apple do, nobody argues that this is legal,” said Reuven.

Assuming nobody found out and your name didn’t get published in the Panama Papers, the last step is to recover your money tax-free.

Even before the clampdown on tax havens, this was almost impossible while living in the United States. Any income under your name from an offshore entity would raise a bright red flag with the IRS.

“So people renounced their U.S. citizenship and moved there to live off the money,” said Reuven. “Some people also left it for their kids.”

If you have managed to hide your money until today, you still have a chance to get it tax-free and not retire in Panama.

First, you have to renounce your U.S. citizenship, since citizenship makes you liable for taxation regardless of where you live around the world.

Since 2008, even this step became quite expensive because you have to pay an exit tax for “covered expatriates,” which pretends you have sold all your assets before you go and charges the going rate on the simulated sale.

But since the IRS doesn’t know about the money you had stashed away in Panama or the Cayman Islands, you can now move to a country that doesn’t tax you on income earned abroad.

“Once you are out of the United States physically, you can live in a place that doesn’t tax source income, like Singapore and the United Kingdom,” said Reuven.

A record number of 4,279 people renounced their U.S. citizenship in 2015, according to the Department of the Treasury.

Eduardo Saverin, the co-founder of Facebook, probably did not have a secret offshore fund to reclaim when he renounced his citizenship in 2012 and moved to Singapore—his Facebook shares are visible to everyone—but he is a famous example of an American who left the country for tax reasons.

OK, so you got away scot-free. How likely can you repeat this trick in the future?

The Panama Papers are only one example of secret data not being so secret, in this case because someone got hold of the 11.5 million documents and leaked them to the press.

In other cases, many tax havens have started to share information with the U.S. government, so they aren’t really tax havens anymore.

The big game changer here was the Foreign Account Tax Compliance Act (FATCA), a law passed in 2010, which forces foreign banks to report information to the U.S. Treasury.

The United States is one of the prime destinations for foreigners to hide their money and avoid paying taxes at home.

This is why former tax havens like Switzerland, the Cayman Islands, the British Virgin Islands, and even Liechtenstein, now share information with the U.S. government. Incidentally, Panama only signed on to it after the publication of the Panama Papers in April of 2016.

“Virtually all of those tax havens are subject to FATCA, all of them have agreed,” said Leeds, although agreement does not guarantee a 100 percent effective compliance.

FATCA’s little brother is the Foreign Bank and Financial Accounts (FBAR) regulation, which forces U.S. citizens to declare any foreign bank accounts with $10,000 in assets. If you don’t and the IRS finds out, you are in trouble. And if your tax haven is part of FATCA, it will find out sooner or later.

There are still means and ways to hide American ownership of the shell company through non-American proxies, but it is getting more and more difficult to do so.

So the United States is on top of getting its tax money back from offshore tax havens, some estimated $60 billion according to a 2014 Senate Report, which doesn’t include the corporate money, which dodges taxes mostly legally.

But what about the other way around? The United States did not sign on to an initiative by the OECD (Organization for Economic Cooperation and Development) to exchange information on banking and investment. It was only one of four countries that didn’t, while 97 countries did.

There is a good reason for this. The United States is one of the prime destinations for foreigners to hide their money and avoid paying taxes at home.

Nevada, South Dakota, Wyoming, and Delaware have almost no taxes and have banking and corporate secrecy laws that would make the British Virgin Islands blush—except that the laws only apply to foreigners and the United States doesn’t share account information with any foreign governments.

“It’s illegal, but the United States figures very highly among the tax havens,” said Reuven. “From a U.S. tax perspective, somebody who is not a U.S. citizen and doesn’t live in the United States doesn’t owe us anything. We have given up on taxing foreign investment since the 1980s because of the trade deficit,” he added.

Capital flowing into the country props up the dollar and funds American imports.

So if you want to avoid paying tax in Germany or Brazil, come to Nevada, which private banker Andrew Penney of Rothschild & Co. said “is effectively the biggest tax haven in the world,” according to a Bloomberg Report.

“From the point of view of any foreign country, because they have secrecy laws which prevent the IRS and the states from reporting your assets, they are pure shells,” said Reuven.

“The Europeans are very unhappy about this, as are the Latin Americans. We are asking the Europeans to help us with our tax evasion problem, but we are not helping them.”

For Americans, this is a no-go as the local banks in the respective states still report to the IRS. “Financial institutions need to identify their customers and report,” said Reuven, and federal taxes always apply either way.

Finance professional Victor Sperandeo, a member of the Trader Monthly Hall of Fame, said you would have to live there to make it work: “You are saving state taxes there. Federal tax you have to pay, otherwise it’s illegal. If you live in New York 180 days or more, you are subject to taxes there; nobody does that.”

As to why people across the world undertake all this hassle to avoid paying taxes or commit outright white collar crimes, the opinions differ.

“It has everything to say about human nature. Taxes are expensive, running a government is expensive. Not everyone wants to pay their fair share, so they look for ways to reduce their tax burdens, sometimes legitimately, sometimes not so much,” said Leeds. “I think we would continue to face the same issues, regardless of the rate.”

Sperandeo thinks there is a simpler solution and it very much depends on the rate: “People don’t want to pay obnoxious taxes. I think if the world was Singapore or Hong Kong where you pay 15 percent flat, everybody will pay their taxes.”