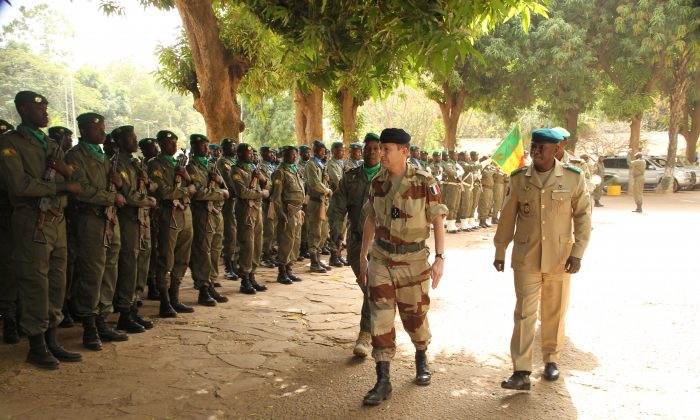 Malian Army Chief of Staff General Mahamane Toure (R) and French Army Chief of Staff, General Pierre de Villiers (C) review troops upon de Villiers' arrival for his meeting with Toure at the Defense ministry in Bamako, Mali, on February 27, 2014. France and Germany sent troops to Mali in its first deployment to Africa, as Mali was thrown into chaos in 2012 when Tuareg separatist rebels launched an offensive in the northern desert helped by Islamist militants linked to Al-Qaeda, after the country's president was toppled in a coup. (Abibou Kouyate/AFP/Getty Images)
Africa

BAMAKO, Mali—Tuareg separatist protesters in Mali said Wednesday they pushed the U.N.’s mission from an airfield in Kidal in the north, burning generators and tearing down tents.

Tuareg protester Moussa Ag Ali said they chased soldiers from the airfield and set fire to at least two generators.

“They fled to their camp,” he said of the peacekeepers.

Protester Ismail Ag Rhissa said demonstrators tore down tents that shelter some of the U.N. mission.

“The soldiers of MINUSMA fired tear gas and warning shots, but they could not stop us,” he said.

A deputy spokesman for the U.N. secretary-general, Farhan Haq, told reporters in New York only that “the demonstrations are now ended.”

A U.N. mission statement said its forces had to fire after they came under “direct heavy fire.” Haq said the U.N. mission fired warning shots but the vehicle proceeded, and the mission had to act to protect civilians.

The head of the African Union mission in Mali, Pierre Buyoya, condemned the recent incidents, and called on all parties to exercise maximum restraint.

Northern Mali fell under control of Tuareg separatists and then al-Qaida-linked Islamic extremists following a military coup in 2012. A French-led intervention in 2013 scattered the extremists, but some remain active and there have been continued bursts of violence.

U.N. troops are now trying to stabilize the north, and peace talks have begun between the Malian government and Tuaregs, who maintain a heavy presence in Kidal and have pushed back against the authority of the Bamako-based government. Al-Qaida is not participating in those discussions.

From The Associated Press. AP reporter Cara Anna at the United Nations contributed to this report.