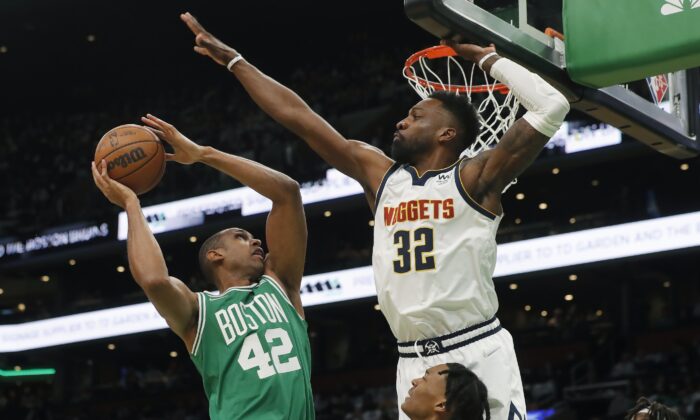 BOSTON—Jaylen Brown sent a six-word missive the day before the start of the month that has proven to be prophetic for the Celtics.

The Celtics haven’t lost a game since.

Robert Williams added 15 points and 16 rebounds to help Boston extend its longest winning streak of the season. Derrick White had 15 points, six rebounds and two assists in his debut with Celtics after being acquired from San Antonio in a trade-deadline deal.

Celtics coach Ime Udoka said White’s performance was a sample of the energy on both ends they hoped he could bring to a group in need of a pure point guard who could space the floor and contribute on the defensive end.

“He did what he’s done and what I’ve seen in the past,” Udoka said. “You don’t miss a beat with him out there.”

Boston spoiled another big night for Nikola Jokic, who had his 71st career triple-double with 23 points, 16 rebounds and 11 assists. Aaron Gordon finished with 17 points.

Jokic said the Nuggets’ 21 turnovers were too much to overcome.

“It happens to us every night,” said Jokic, who had nine turnovers. “Some nights are better, some nights are worse. … We didn’t put ourselves in good positions.”

Denver led by as many as 11 in the first quarter and held a nine-point edge at the half. But the Celtics outscored the Nuggets 57–42 over the final 24 minutes.

White, who said he got emotional when Spurs coach Gregg Popovich informed him he was being dealt, didn’t find out he was playing until about an hour before tipoff.

“It was all pretty crazy. I was pretty shocked. I didn’t see it coming,” Whjte said of the trade. “But as soon as I got here, I got excited.”

“We just stayed with it,” he said. “We didn’t let anything fluster us. We just kept trusting in one another.”

Boston ended a wild sequence that started on the defensive end by a Williams block with an alley-oop to him on the other end to put the Celtics in front 91–90 with just over seven minutes to play.

A technical foul during an ensuing timeout on JaMychal Green pushed the lead to 92–90 following a free throw by Tatum. Denver tied it at 95 on a 3 by Jokic and nudged in front on a free throw by Will Barton.

But Boston got the lead back on another dunk by Williams and a free throw by Brown that made it 98–86. Jokic got to the foul line but converted on only one of his attempts, and White then got free underneath and dropped in a layup.

Barton missed a 3 with just over a minute left. Smart was fouled on the other end and hit two free throws to push the lead to 102–97 with 55.1 seconds left.

White made his presence felt almost instantly with his new team. He checked in at the 4:35 mark of the first quarter and less than a minute later scooped up a deflection by Smart, led a fast break and lobbed a pass to Brown for an easy layup.

When he wasn’t scoring, he always seemed to find his way to the ball, whether it was tipping in a miss or just keeping the ball alive in the half court.

Nuggets: Jokic has had eight triple-doubles in his last 14 games and is just seven triple-doubles behind Wilt Chamberlain (78) for fifth on the NBA all-time list. Held a 60-51 halftime lead. Led by as many as 11 in the first quarter, getting eight points from Gordon and seven by Jokic.

Celtics: Smart had three steals in the first quarter on his way to four in the first half. Boston had 54 points in the paint.

Nuggets: At Toronto on Saturday.