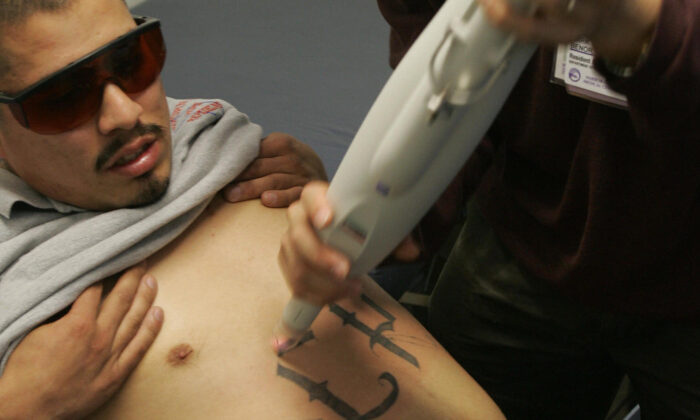 Tattoo Removal Can Give Inmates a New Lease on Life

Tattoo removal can often make all the difference for an ex-convict landing a new job, and California prisons are now teaming up with tattoo removal companies to offer the procedure while people are still incarcerated. Many prisoners say the procedure is liberating.

Fifty-seven more women who have 160 tattoos have had their tattoo removed with a community re-entry program in Sacramento. The agency instituted the program in May 2018, because former convicts revealed the tattoos were keeping them from getting jobs when they left prison.

Michele Kane, a spokeswoman for the authority, told the news outlet, “They can get rid of the old scars or signs that may have brought them to prison. It’s like a release.”

The Department of Corrections and Rehabilitation anticipates that the program will be expanded to 3,000 additional prisoners next year, while giving male inmates laser tattoo removal treatments for the first time, due to $1.1 million in funding from the state budget (pdf).

The program “offers a real and tangible step towards rehabilitation and employability,” the news outlet reported. The LASD and other agencies either acquired laser treatment equipment or had volunteer professionals perform the tattoo removal services.

The Twin Towers Correctional Facility in Los Angeles, where thousands of prisoners are confined, offers an Education-Based Incarceration program that provides high school, vocational, and college classes and allows prisoners to participate in the tattoo removal.

Both male and female prisoners have taken advantage of the program, which is paid for by the jail’s Inmate Welfare Fund, “using proceeds from commissary sales and other prisoner-generated revenue,” according to Prison Legal News.

According to LASD spokesman Steve Whitmore, initial studies of prisoners who participate in the Education-Based Incarceration program show they have lower levels of recidivism.

How does tattoo removal work?

Tattoos are removed with a high-intensity light beam that breaks up the pigment in the ink. The ink is then absorbed by the body, and the tattoo slowly fades over the course of three to eight sessions.

The process can be painful, as the laser is “blowing up the ink,” according to Barbara Schach, a technician with Inkoff.me, a tattoo removal company that partners with law enforcement agencies and nonprofits to remove tattoos on inmates and ex-gang members, the San Francisco Chronicle reported.

According to the Inkoff.me website, the company started in 2012 and rented a laser to provide services at churches and community centers. The company has now removed more than 100,000 tattoos.