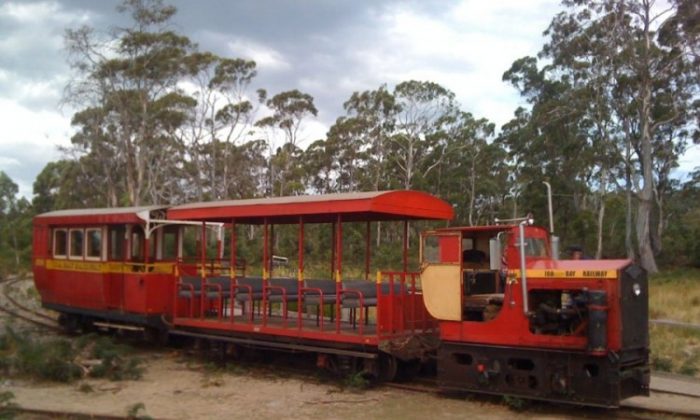 A glance from the tram of the placid estuary, Ida Bay. (Chani Blue/The Epoch Times)
US

The Ida Bay railway tram was originally a steam locomotive with tracks built along the Ida Bay estuary to transport Limestone. After World War II, the steam tram was updated with five Malcolm Moore petrol locomotives, which were Army surplus.

On first appearance, the tram looks surprisingly tiny, too small for use in the mining industry. Its wheels ride upon a mere 2-inch gauge line and it looks more like a toy train. Train lovers young and old will get a kick knowing they are riding on Australia’s oldest original bogie flat wagons (an open style wagon for carrying freight).

Back in the early 1920’s, the tram line was constructed to transport limestone, which was mined from quarries southeast of the Lune River. Once the tram delivered the load to the wharf at Brick Point nearby, it was shipped by river vessel to the nearby town of Electrona, just north of Snug. The limestone was used to make calcium carbide. In those days it was a keystone ingredient in the steel industry, and for the production of synthetic rubbers and plastics.

The changing times saw the Ida Bay tram destined for retirement, as new roads with faster trucks took over the workload. But this dear little “chugger” was simply too important to lay to rest and just two years on in 1977, it was purchased and restored for use in the tourism industry. The re-opening of the Ida Bay railway for day-trippers, and international travellers alike, illustrates Tasmania’s changing needs, a sign of what was to come; an emerging tourist industry.

Now, people of all ages can ride on the train for a genuine, historical river experience, run by local people. The restored open carriages allow passengers to feel the wind in their hair, smell the fragrant bush flora, and be as close as possible to the natural surroundings, which have hardly changed since the line was first constructed in 1922.

As the tram follows along the river bank, the Lune River meanders towards the sea, and widens quite considerably. Along its banks are several hidden coves and inlets with pristine white sand. The views along the river’s edge are spectacular as the tiny tram cuts through the pretty native bushland. The tram allows passengers to access an untouched world that would ordinarily only be accessed by boat. The open carriages give people remarkable views of the pretty native scrub, allowing people to get close enough to spot the abundant bird life and admire the native flowers.

As the rickety train noisily rattles through the bush at a slow and easy pace, one can sense how slow and labour-intensive the work would have been for those limestone miners back in the 1920’s. Couple that with the cold temperatures of the southern Tasmanian climate and you can, for a brief moment, imagine what work would have been like for those hardworking men.

The whole experience is a round trip and takes two hours to complete. The friendly train conductor makes a couple of stops along the way to explain the history and show the places important to the people of Lune River, including some very old early settler graves and Aboriginal midden sites.

More wild and remote scenes unfold as you continue further along the river, and the further you venture from civilisation, the more spectacular. Next to travelling directly by water vessel, the tram is a great way to really get a taste of the pristine rivers of southern Tasmania.

Passengers are invited to bring a picnic lunch to enjoy once you arrive at Deep Hole, at the end of the line, or you can take advantage of the BBQ facilities under a sheltered gazebo. Adventurous bush walkers can continue walking towards the point, Southport Bluff, and see the King George Monument which was built in honour of the 134 souls lost at sea aboard the convict ship King George III in 1835. But remember to bring a warm wind proof jacket, as even in summer, the cold wind can whip up at anytime. There is a fully enclosed carriage at the end of the tram for the elderly or mothers and babies to ride in.

The souvenir and information shop is worth a quick look before you leave as is a hearty burger at the Café. There is also camping with shower and toilet facilities as well as basic cabins available at the tram station to hire.

Departure times vary in winter to summer so check the timetables online: www.idabayrailway.com.au

The Ida Bay Railway is a two-hour drive south of Hobart. Other places of interests nearby are the Hastings Caves, a thermal heated swimming pool and a museum of natural minerals, including fossils.