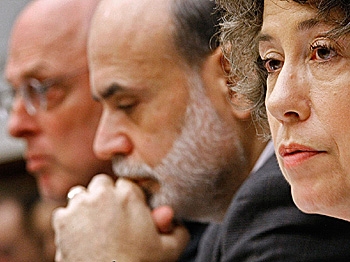 Heide B. Malhotra
View profile
Follow
biggersmaller
Print
The United States Department of the Treasury is propping up banks that refuse to lend to the very American taxpayers who are footing this once-in-a-lifetime handout.

Both the London Interbank Offered Rate (LIBOR) and the federal prime rate have dropped dramatically. Yet, the all-time low interest rates have not benefited the consumers. Credit card rates continue at 14.32 percent, with no changes over the past months, according to the Index Credit Card Web site.

The Treasury Department invested $14.77 billion of its Troubled Asset Relief Program (TARP) funds in 43 banks beginning this year. In 2008, the Treasury invested $192 billion in 257 large and small financial institutions in 42 states and Puerto Rico, not including the most recent investments.

The largest investments, as high as $25 billion, were made in Citigroup Inc., JPMorgan Chase & Co., and Wells Fargo & Company last year.

Bank of America Corporation (BofA) received $15 billion in 2008 and another $20 billion last week, making it the largest beneficiary of taxpayers’ money.

“Only healthy, viable banks are eligible for the program and it is designed to generate a positive return to the taxpayer,” Neel Kashkari, Interim Assistant Secretary for Financial Stability, said during a January speech at Georgetown University in Washington D.C.

Kashkari is certain that the Treasury’s actions have had positive effects and that by joining with the Federal Reserve and the Federal Deposit Insurance Corporation it “prevented a financial collapse.”

The Treasury tried to appease the U.S. taxpayer by telling them that it is doing all in its power to improve public confidence in the U.S. financial sector and to get the banks to start lending again.

Indeed, fund usage limitations, including dividend and executive compensation restrictions, were put in place for those who benefited from the government’s deep pockets.

But Kashkari suggests that the public needs to understand that banks have become risk averse, as risky behavior has been the fundamental cause for the financial crisis in the first place. Kashkari excuses the banks’ greed by claiming that they have been victimized, and thus begs for the public’s indulgence.

The Congressional Oversight Panel asked the Treasury a series of questions at the beginning of December regarding the distribution of TARP funds.

The goal of the panel is to bring transparency to the table.

“The American people have a right to know how their taxpayer dollars are being used, and so far, they have not gotten the transparency and accountability they deserve,” Elizabeth Warren, Chair of the Oversight Panel, said in a recent press release.

Treasury failed to answer 23 questions and other responses were wishy-washy, according to a grid of all the questions published in the panel’s second report on Jan. 9.

The report made it perfectly clear that the Treasury has not done its legwork. There is no strategy to assure that the program is working, no one is monitoring the invested funds, and no reporting mechanism has been built into TARP.

In essence, the Treasury has no idea what the banks did with their bailout money.

The funds were not used to help troubled homeowners, although the TARP funds, as stipulated by law, are meant to address homeowners’ plight.

“For Treasury to take no steps to use any of this money to alleviate the foreclosure crisis raises questions about whether Treasury has complied with Congress’s intent that Treasury develop a ‘plan that seeks to maximize assistance for homeowners,’” the panel’s report rebukes.

Without learning from past mistakes, the Treasury proceeded to provide the auto industry funds that lack restrictions and monitoring of vehicles, eroding public confidence even further.

However, congressional panel member Senator John Sununu, R-N.H., disagrees with the panel’s request for more detailed information. Sununu believes that the banks are victims of the crisis.

“There are several questions posed in the Panel’s Dec. 10 report that are enormously difficult, if not impossible, to answer with any certainty,” Sununu wrote in an attachment to the report. “Moreover, there are a few that are best left unanswered.”

The 'Too Big to Fail' Doctrine

The biggest reason to hand out federal funds is that some companies are deemed by the government to be “too big to fail.”

This doctrine, a concept that departs from the free market theory, was formed in the wake of the Continental Illinois Bank liquidity crisis in 1984. It inhibits runs on a bank by depositors, lulls the bank’s depositors into inaction, and reduces the push toward bank regulations.

“Once large depositors know that a bank is too-big-to-fail, they have no incentive to monitor the bank because no matter what the bank does, large depositors will not suffer any losses,” Dr. Fredric S. Mishkin argues in his article “How Big a Problem is Too Big to Fail,” published by the National Bureau of Economic Research in 2005. Mishkin is a former member of the Board of Governors of the Federal Reserve System.

Some suggest that “too big to fail” is entirely a misnomer, opting instead for “too-politically-important-to-fail.”