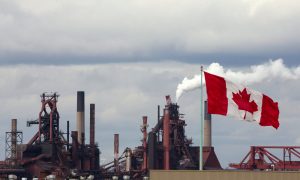 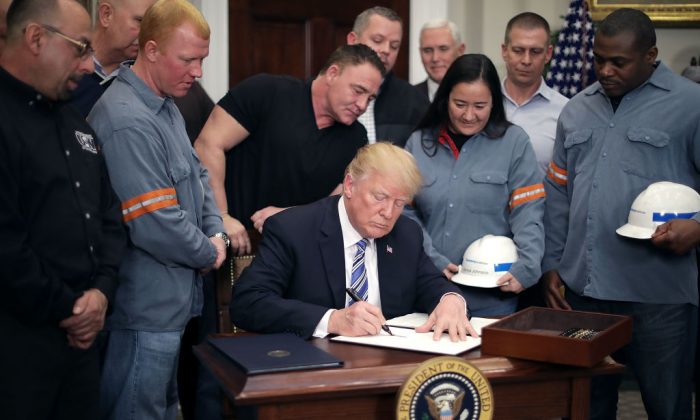 Surrounded by steel and aluminum workers, U.S. President Donald Trump signs a 'Section 232 Proclamation' on steel imports during a ceremony in Roosevelt Room at the White House in Washington, on March 8, 2018. (Chip Somodevilla/Getty Images)
Companies

Steel and aluminum tariffs are just the beginning in an ongoing fight to unleash American industry, says Wilbur Ross
By Emel Akan
Print

President Donald Trump’s new tariffs on imported steel and aluminum look like an effort that goes beyond its stated rationale of preserving national security. The tariffs could be the first of a number of initiatives by the Trump administration to retaliate against unfair foreign trade practices.

“America will remain open to modifying or removing the tariffs for individual nations,” said Trump.

Trump has promised to show “great flexibility and cooperation towards” real friends. Hence, there may be a flexible set of tariffs depending on the outcome of these negotiations.

The countries that export the highest volumes of steel and aluminum to the United States also happen to be some of its key allies, including Canada, the European Union (EU), Japan, and South Korea.

By getting tough on tariffs, Trump has created a bargaining chip to force these allies to knock down their barriers to American goods.

“It’s just the start of unleashing American industry from the unfair trade practices that have hounded us for years,” Secretary of Commerce Wilbur Ross told Fox News on March 8.

Behind the scenes, however, EU representatives have been pressing for exemptions from tariffs, claiming that the bloc is a close ally and that any import levies are unjustified.

At a weekend rally in Pennsylvania on March 10, Trump took aim at Europe, threatening to extend tariffs to its car industry.

Trade and investment flow between the United States and the EU creates the largest economic relationship in the world. The U.S. goods trade deficit with the EU was $152.4 billion in 2017, according to the U.S. Census Bureau.

U.S. exporters and investors, however, face barriers to entering or expanding their businesses in certain sectors of the EU market, stated a report by the Office of the U.S. Trade Representative (USTR).

The EU’s average applied tariff rate is 4.8 percent. The average agricultural tariff is 10.9 percent and the nonagricultural rate is 3.9 percent. Although the EU imposes a low levy for nonagricultural goods, there are some high tariffs that affect U.S. exports, such as a 10 percent duty on passenger vehicles and 22 percent on trucks.

There are some non-tariff barriers as well. One of the issues American companies face in the EU market is “European standardization and conformity assessment procedures.” The EU’s standard measures are so strict that the products that conform to international standards may not meet EU standards, stated the USTR report. Therefore, U.S. exporters face extra challenges in accessing the EU market.

On March 12, Trump wrote on Twitter that the United States would hold meetings with EU representatives to address trade issues.

“Secretary of Commerce Wilbur Ross will be speaking with representatives of the European Union about eliminating the large Tariffs and Barriers they use against the U.S.A. Not fair to our farmers and manufacturers,” he wrote.

Similarly, American companies are facing difficulties in accessing Japan’s automotive market. A number of non-tariff barriers exist that impede access to the market. As a result, overall sales of American-made vehicles and automotive parts in Japan remain very weak, according to the USTR report.

On March 10, Trump wrote on Twitter: “Spoke to Prime Minister Abe of Japan, who is very enthusiastic about talks with North Korea. Also discussing opening up Japan to much better trade with the U.S. Currently have a massive $100 Billion Trade Deficit. Not fair or sustainable. It will all work out!”

Both Canada and Mexico received a temporary exemption from tariffs on steel and aluminum imports.

Trump signaled that the two allies could make their exemption permanent by conceding to U.S. demands in the renegotiation of the North American Free Trade Agreement (NAFTA).

“Due to the unique nature of our relationship with Canada and Mexico—we’re negotiating, right now, NAFTA—we’re going to hold off the tariff on those two countries, to see whether or not we’re able to make the deal on NAFTA,” Trump said at the White House on March 8.

Canada and Mexico account for 32 percent of U.S. imports in steel and aluminum, according to the Brookings Institution. And Canada is the largest exporter of the metals to the United States.

China is a relatively small exporter of steel and aluminum to the United States, but it has been on Trump’s radar for a long time. The United States has its largest trade deficit with China.

“We’re negotiating now with China. We’re in the midst of a big negotiation. I don’t know that anything is going to come of it,” Trump said.

Trump wants to cut the trade deficit with China by $100 billion, which accounts for more than a quarter of last year’s $375 billion trade deficit for goods.

Trump recently referred to tweets by Tesla CEO Elon Musk on the difference between import duties imposed by China and the United States. In a series of tweets, Musk complained that an American car going to China pays a 25 percent import duty while a Chinese car coming the other way pays just 2.5 percent.

In response to Musk, Trump said a “reciprocal tax” or “mirror tax” would be put in place soon.

In addition, the Trump administration may take a tougher stance on the Chinese regime’s protectionist policies, which could lead to retaliatory trade measures over intellectual property.

On Aug. 14, Trump signed a memorandum to tackle China’s trade practices with regard to the theft and forced transfer of American intellectual property. The memorandum has ordered Lighthizer to determine whether a formal investigation into China’s trade policies is needed.

The Chinese regime’s protectionist and trade-distorting policies have weakened the competitiveness of American companies.

Key Democrats Sen. Elizabeth Warren (D-Mass.) and Senate Minority Leader Chuck Schumer (D-N.Y.), who have been the most prominent critics of Trump in the Senate, support the president’s efforts to address China’s unfair trade practices.

“I have been one of the chief critics of status quo on trade,” said Schumer on the Senate floor on March 7.

“The president’s instincts to go after China are correct,” he said. “China is eating our lunch. China is rapacious.”

However, Trump’s proposal to increase tariffs has prompted an outcry within the Republican Party.

Some Republican lawmakers have openly discussed taking legislative action to claw back Trump’s trade powers. They are concerned that sweeping tariffs would spark a global trade war.

But talk of a trade war is a false narrative, according to Trump’s top trade adviser, Peter Navarro.

“America is a free trading nation with among the lowest combinations of tariffs and non-tariff barriers of its major trading partners,” he wrote on USA Today. “Fair and reciprocal trade and a secure nation is all we seek.”