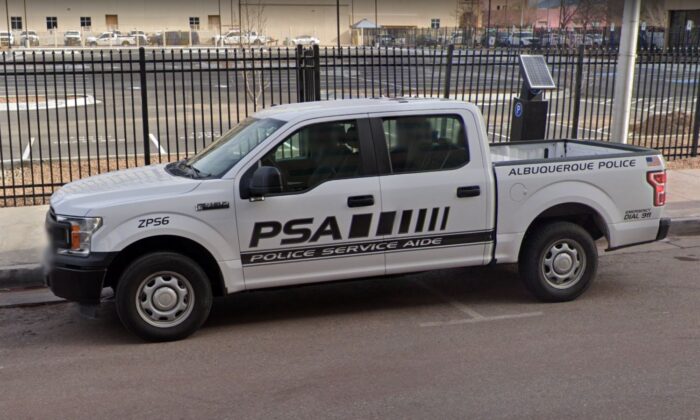 An Albuquerque city police vehicle in New Mexico in February 2022. (Google Maps/Screenshot via The Epoch Times)
Crime and Incidents

A Muslim man has been found fatally shot in Albuquerque, New Mexico, and police suspect that he may have been the fourth victim in a series of targeted slayings.

Officers from Albuquerque police’s Southeast Area Command responded to reports of a shooting between Truman Street and Grand Avenue, NE, where they found a deceased adult male, according to an Aug. 6 statement from the department.

The victim, who was in his mid-20s, was a Muslim man from South Asia. A spokesperson from the Islamic Center of New Mexico identified the victim as Naeem Hussain, according to the Albuquerque Journal. One of Hussain’s female friends told the media outlet that Hussain had become a U.S citizen only two weeks before.

“Investigators believe Friday’s murder may be connected to three recent murders of Muslim men also from South Asia,” the release said. Police had said earlier that the other three Muslim men killed in the state’s largest city in the past nine months appeared to have been targeted for their religion and race.

“Detectives on Thursday determined there is a connection between the Aug. 1, 2022, murder of Muhammed Afzaal Hussain, 27, and the July 26, 2022, murder of Aftab Hussein, 41. Both men are Muslim and from Pakistan. They were killed in Southeast Albuquerque, near Central Ave.”

Detectives are also seeking to determine whether the slaying of an Afghan Muslim, Mohammad Ahmadi, on Nov. 7, 2021, is connected to the other homicides. Ahmadi was killed outside a business that he was running together with his brother.

New Mexico Gov. Michelle Lujan Grisham said on Aug. 6 that she would send additional state police to Albuquerque in response to the most recent slaying.

“We will not stop in our pursuit of justice for the victims and their families and are bringing every resource to bear to apprehend the killer or killers—and we WILL find them,” she said in an Aug. 6 statement.

Tahir Gauba, director of public affairs with the Islamic Center of New Mexico, has been receiving numerous phone calls following Hussain’s death, as people are “beginning to panic.” Hussain was reportedly on the phone with his fiancée in Virginia when he was shot.

“She heard the gunshot I think and she freaked out,” Gauba told the Albuquerque Journal. “So he didn’t respond after that, so she called one of his friends. His friend went over there and his friend is the one who called 911.”

The slaying is being investigated by multiple agencies including the New Mexico State Police, U.S. Marshals Service, and the FBI.