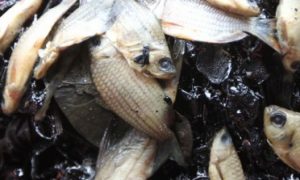 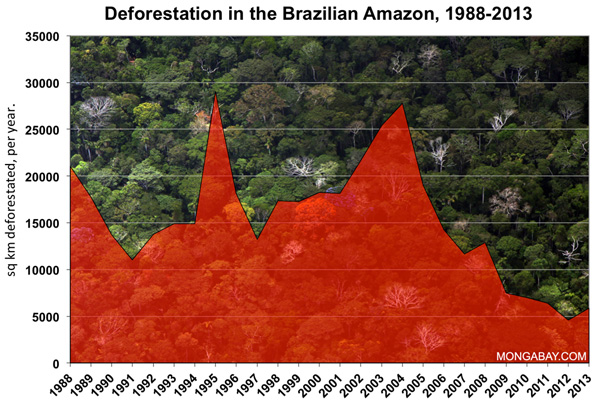 Annual deforestation in the Brazilian Amazon since 1988. Clearing has declined sharply since 2004. (news.mongabay.com)
News

news.mongabay.com
View profile
Follow
biggersmaller
Print
Targeted law enforcement efforts via Brazil’s green municipalities programs were responsible for reducing deforestation by 10,653 square kilometers — an area the size of Massachusetts — between 2009 and 2011, argues a paper published in the journal Land Use Policy.

The study, led by Brazilian researchers, is based on modeling and analysis of remote sensing data. It estimates that the program, which imposes stiff penalties on municipalities that have excessively high deforestation rates, effectively avoided 1.23 billion tons of carbon emissions during the period.

The program has been facilitated by Brazil’s advanced deforestation monitoring system, which enables authorities to detect forest clearing on a monthly basis and accurately track annual deforestation. Other research, published last year by the Climate Policy Initiative (CPI), asserted that the monitoring system could be credited with nearly 60 percent of the decline in deforestation observed in the Brazilian Amazon between 2007 and 2011.

The Land Use Policy paper warns however that there remains a danger that deforestation could again rise in Brazil due to planned infrastructure projects, cuts in protected areas, growing demand for agricultural commodities, and a change in the forest code that regulates how much forest landowners are required to maintain.