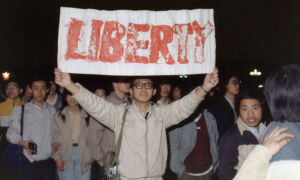 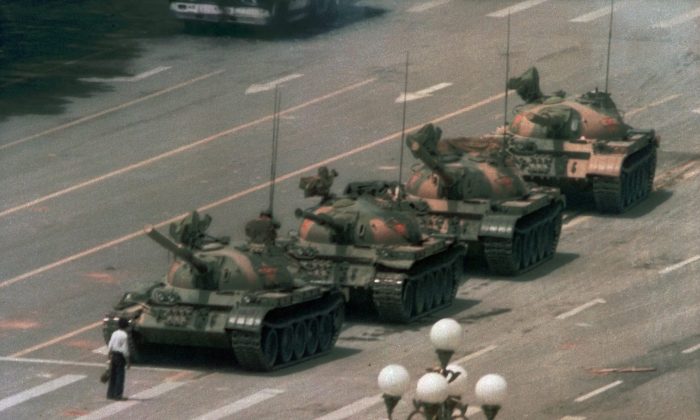 A Chinese man stands alone to block a line of tanks heading east on Beijing’s Avenue of Eternal Peace during the Tiananmen Square Massacre on June 5, 1989. (Jeff Widener/AP Photo)
US News

Microsoft on Friday said that its search engine Bing yielded no results when users entered the query “tank man” in the United States and elsewhere for part of Friday because of “accidental human error.”

Users in the United States and other countries, including the United Kingdom, Germany, and Singapore, reported that Bing returned the message “There are no results for tank man” when they tried to search the term.

Meanwhile, rival search engine Google, on the other hand, returned many results for the image when the “tank man” query was entered on Friday.

Some social media users raised concerns that Bing, one of the few foreign search engines available in China, may have been censoring the term on the 32nd anniversary of June 4, 1989, the Tiananmen Square massacre.

“This is due to an accidental human error and we are actively working to resolve this,” Microsoft said in a statement to news outlets. Smaller search engines such as DuckDuckGo that license results from Microsoft faced similar issues around “tank man” searches and said they expected a fix soon.

Several hours after the issue was reported, Bing returned images of the iconic “tank man” for the search query as of early Saturday eastern time.

Kenneth Roth, the executive director of Human Rights Watch, said on Twitter that he found Microsoft’s statement hard to believe.

“Outrageous: on the anniversary of the murderous Tiananmen Square crackdown, Microsoft’s Bing search engine suddenly won’t return any images if you search for ‘tank man,’ the iconic photo. I just tried,” he wrote. “Hard to believe this is an inadvertent error.”

“Tank man” refers to the iconic unidentified man who was pictured standing in front of a line of tanks near Tiananmen Square on June 5, 1989—a day after the Chinese Communist Party (CCP) ordered their troops to roll in tanks and open fire on civilians following weeks of protests centered in Tiananmen Square.

The CCP has never released a full account of the violence. Days after June 4, 1989, the CCP announced a death toll of about 300, most of them soldiers. However, rights groups and witnesses say thousands of people died. Unnamed sources within the CCP say at least 10,000 people were killed, according to a declassified British diplomatic cable and declassified White House documents.

A significant percentage of the Microsoft employees who work on Bing are based in China, including some who work on image-recognition software, according to a former employee, Reuters reported.

China is known to require search engines operating in its jurisdiction to censor results, but those restrictions are rarely applied elsewhere.