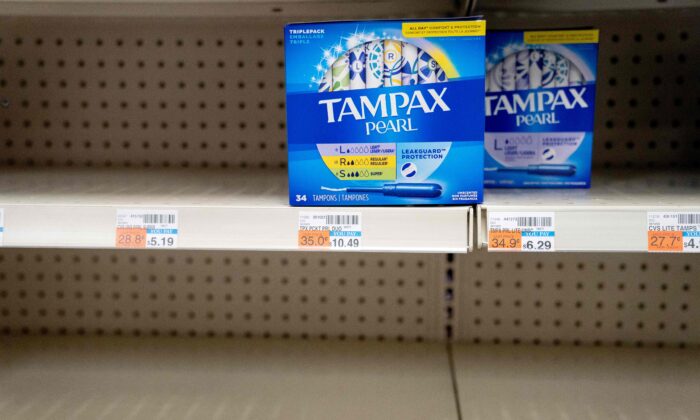 Two remaining boxes of Tampax tampons are seen on a shelf at a store in Washington, D.C., on June 14, 2022. (Stefani Reynolds/AFP via Getty Images)
Viewpoints

Tampon Shortage: Yet Another ‘War on Women’

BEAVER, Pennsylvania—If you were looking to purchase tampons here at the Beaver Super Market along Third Street, the city’s Main Street business district, the manager says there has been a shortage for a while. When he does get them in, they are gone by midday.

He is not alone. A visit to several larger chain grocery and pharmaceutical stores throughout Western Pennsylvania found almost all of them down to just a handful of boxes of tampons. Smaller local grocery stores often had none. It was slim pickings, even for the generic store brands.

Instacart, the grocery delivery service, said in a statement Monday that the rate its personal shoppers were able to find tampons on store shelves to fill orders dropped to 67 percent. As a result, women are stocking up when they can find them. Panic-buying has driven sales up over 29 percent week over week.

Before the tampons went missing, buying them had already become as traumatizing as filling up your gas tank. The cost to have your period this past year has gone through the roof because the costs of all of the workings that go into making a tampon and getting them to a store near you—think diesel fuel—have also gone through the roof.

The average cost of a box of tampons is nearly 10 percent higher than it was at the beginning of the year, according to NielsenIQ.

It is a problem women have been dealing with for months—and one of three serious inflationary or supply chain issues, the other two being higher gas prices and baby formula shortages, that are making women feel both angry and powerless.

As one woman told me, she is the one in the family who has the sticker shock every time she fills up the gas tank because she is the one carting the children off to school activities and now summer day camp and sports practices. Then there’s the added indignity of having to waste precious gas visiting three or four different stores, children in tow, to find feminine hygiene products.

In short, no one has been hit harder in the past year in this country than women under age 45, no matter their socioeconomic status. The strain it is placing on them is palpable.

As with the baby formula shortage, people knew this was coming. In early May, Edgewell Personal Care, the company that makes Playtex, warned in its second quarter earnings report that a lack of raw materials, transportation problems, supply chain constraints, and manufacturing labor shortages had hurt the supply of tampons.

Any woman can tell you unequivocally that tampons are a necessity. One cannot simply wait it out until the price goes down or until there is more stock. Monthly periods aren’t optional.

Bruce Haynes, a partner at FGS Global, said that while you can find some positive macroeconomic indicators, such as low unemployment, the daily reality of the economy is tough for consumers. “Lingering supply chain issues are causing shortages of critical staples like baby formula, tampons, and peanut butter,” he said. “Gas prices are at an all-time high. Small businesses continue to struggle with labor shortages.”

Haynes said the combination of these things has driven the Michigan Consumer Sentiment Index, a consumer confidence index published monthly by the University of Michigan, to an all-time low. “Big numbers from Washington don’t matter right now,” he said. “It’s the numbers at the pump and the numbers on the shelves that are driving public opinion.”

To date, the White House has failed to connect with the public on this crisis. It is a peculiar omission, considering that 60 percent of the White House staff appointed by President Joe Biden are women.

But as with many of the most important problems to hit the public in the past year, including high gas prices, soaring inflation, baby formula shortages, fentanyl overdoses, and out-of-control crime in their neighborhoods and suburbs, this White House and its president are dangerously disconnected from the people they serve. This isn’t a Left-versus-Right thing but an inside-versus-outside thing. Nothing that is negatively impacting the daily life of average people is affecting these high-powered political staff. They cannot message themselves out of this, nor do they feel empathy for your situation.

A few weeks ago, there was a smattering of Beltway stories about the “turmoil” among White House staff that described a house divided between the young and the seasoned. This would be a very normal occurrence in any White House, corporate boardroom, national newsroom, or academic faculty. Everyone interviewed, on background of course, in these stories focused on who was more adept at getting Biden’s messaging right. What they all missed was that few of them leave the White House frequently enough to understand what the right message could possibly be. And when they do leave, it is only to go to their homes that are located in six of the 10 wealthiest counties in the nation. Or perhaps they fly on Biden’s presidential jet to attend stage-managed events with no meaningful feedback from real voters. Then, perhaps, off to a fundraiser.

So, in the coming days, if Biden or the press secretary is asked about this crisis, they will likely answer as they have on the gasoline crisis or the baby formula crisis or other inflationary costs. They will then all go back to the war room and ask themselves why Biden’s approval ratings with women, in particular suburban women, have collapsed in the polls.