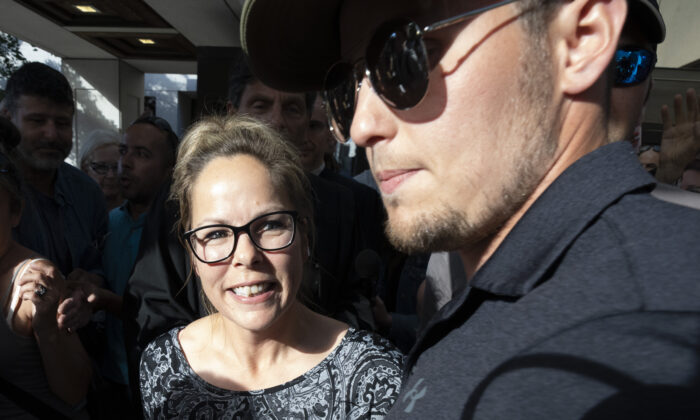 Freedom Convoy organizer Tamara Lich leaves the courthouse after being released from jail in Ottawa on July 26, 2022. (The Canadian Press/Adrian Wyld)
Canada

Freedom Convoy organizer Tamara Lich is a “political prisoner” targeted by the federal government for holding political views that run counter to its own, says Conservative leadership candidate and MP Leslyn Lewis.

“[T]he answer is yes. Tamara does meet the definition of a political prisoner—she was imprisoned for her political beliefs and actions,” Lewis said in an email to her supporters on Aug. 11.

“The Liberals penchant for weaponizing institutions to silence their political opponents is undermining the very pillars that should be holding society together.”

Lich was released late last month after having been arrested for the second time on June 27 for allegedly breaching her bail conditions. In all, the 49-year-old Métis grandmother, who has no criminal record, spent 49 days in jail awaiting trial on charges stemming from her role as one of the key organizers of the Freedom Convoy.

Lewis, who is a lawyer and has tracked Lich’s case, criticized how the Canadian legal system has been “eroded” by a “political vendetta.”

“In a previous letter, I outlined the fact that the first judge who detained Tamara was a former Liberal candidate, and the crown attorney who prosecuted Tamara had donated over $17,000 to the Liberal Party since 2013,” she said.

Lich was first arrested on Feb. 17 on charges of mischief, counselling to commit mischief, obstructing police, among other charges, after the Liberal government invoked the Emergencies Act to quell the convoy protest this winter in Ottawa over federal COVID-19 vaccine mandates.

After initially being denied bail, she was released in March on a number of conditions, including having no contact with fellow convoy organizers.

In her second arrest on June 27, Lich spent nearly 30 days in jail after Crown prosecutors alleged she breached her bail conditions at a gala event organized by the Justice Centre for Constitutional Freedoms where she was presented with the 2022 George Jonas Freedom Award on June 16.

The Crown presented as evidence a photograph of Lich and fellow convoy organizer Tom Marazzo taken at the event, and a video briefly showing Lich sitting at a table where Marazzo and others were seated.

Lich’s defence had argued that the “less than three-second congratulatory interaction” after Lich had delivered a speech at the awards dinner wouldn’t lead to any illegal activity.

Her new bail conditions included not setting foot in Ottawa except for court appearances, tighter rules around communication with other convoy organizers, and another $37,000 bond. Her initial bond was $25,000.

“Tamara Lich is just one example of what happens when government uses its power to control Canadians, to inflame hate and division and to infest independent institutions with political operatives,” Lewis said in her email.

“Sadly, over the past two years under COVID-19, [Prime Minister] Justin Trudeau and the Liberals have created an environment that has undermined our institutions for political gains,” she added.

“Under the guise of protecting people’s health and safety, we have seen the erosion of our constitutional rights, and seen our justice system, law enforcement, health system and media weaponized to silence political opponents.”

The current political climate “normalized” acts such as charging and disciplining of doctors with dissenting views, freezing bank accounts, confiscating property of protesters, and “publicly shaming and disclosing the addresses of people who donated to a democratic movement,” Lewis said.

“The only solution to cure the fragility of our democracy is to have citizens of all political stripes acknowledge the dangerous course that we are on, and to have courageous leaders involve checks and balances that will compel institutional actors to publicly declare conflicts as well as amend the Emergencies Act to require a minimum of 2/3 of parliament to invoke it,” she said.

During a campaign stop on July 20, Conservative MP Pierre Poilievre who is also running in the Conservative leadership race, said he will not control who goes to prison when asked what he would do to ensure Canada doesn’t have any political prisoners if he becomes prime minister.

“As a prime minister, I will not control who goes to prison, because I am not responsible for making arrests or making judgments—police and judges must make those decisions,” Poilievre answered.

He added that it would be a “disaster” if Canada becomes a country where politicians have the power to “choose who goes to jail.”

“I’m not going to tell you … what kind of sentence anyone is going to get, because it’s not the role of a prime minister—that’s the job of police to lay charges, for Crown attorneys to prosecute charges, for defensive lawyers to defend against the charge, and for judges and juries to deliver verdicts and sentences,” he said.

Jean Charest, another leadership candidate, said in a tweet on July 14 that he will launch a public inquiry into the federal response to the pandemic if elected. He was responding to a commentary published in The Epoch Times written by former Reform Party leader Preston Manning who proposed instigating a national inquiry on those responsible for the “unconscionable persecution” of Lich.

“I agree with Preston Manning. Under my leadership, Canada will conduct a National Commission of Inquiry into Trudeau’s COVID response, including his unprecedented and irresponsible use of the Emergencies Act,” Charest said.