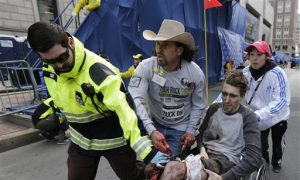 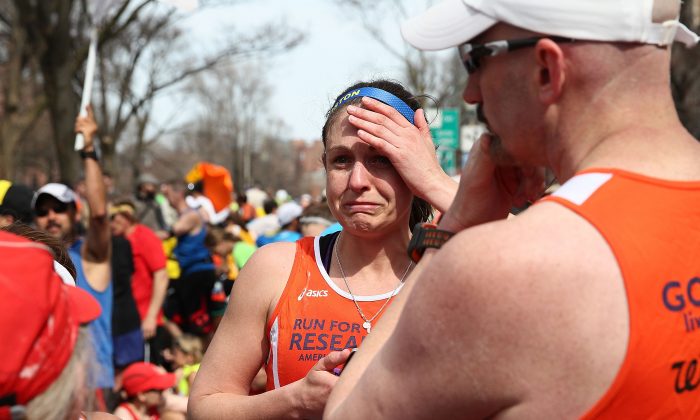 How to Talk to Children About Boston Marathon Explosions

Advice from a pediatrician, parents, Mr. Rogers, and others
By Kelly Ni
biggersmaller
Print

Dr. Claire McCarthy, a pediatrician and medical communications editor at Boston Children’s Hospital, advised parents on how they should talk with their children about the Boston Marathon explosions. She helped other parents, even though she was still shaking herself—McCarthy’s daughter was at the Boston Marathon finish line on April 15.

“Very scary. She’s fine,” McCarthy tweeted. Boston Children’s Hospital staff members were among the runners in the marathon raising money for children, and the hospital received 10 patients injured in the explosion at the Boston Marathon.

It would be easier to cry than to talk, she wrote in a Boston Globe blog post, “but words have to be said to children; as parents, we don’t get the luxury of processing and dealing separately from our children.”

On the Boston Children’s Hospital pediatric health blog, McCarthy laid out suggestions for parents in the face of such incomprehensible tragedy.

Here are McCarthy’s suggestions to parents, adapted from their advice after the Sandy Hook school shooting, in talking with children about the Boston Marathon explosions.

1. Tell your children what happened–it’s important that they hear it from you, she wrote. “Do it in a broad-strokes way,” according to McCarthy. Example: “There were explosions at the marathon and some people were hurt.”

2. Answer their questions simply and honestly. Details are not necessary.

3. Limit their exposure to media. “It’s hard not to end up glued to the television, especially as events are unfolding, but it may be very upsetting to children,” McCarthy wrote. “Use your laptop or smart phone instead.”

4. Let them feel safe. “Make sure they know that events like these are very rare. It’s usually very safe to be in public places,” according to McCarthy.

5. “Let them know that you, and other helping adults, are working all the time to keep them safe,” she wrote. An example is to talk about some of the ways you do this.

6. “Understand that they, like you, may need time to process what has happened,” McCarthy suggested. “They may be upset but not even know why, so be patient if they act out in unusual ways.”

7. Call your doctor if your child is very sad or anxious and nothing you are doing is helping, advises McCarthy.

8. Finally, give lots of extra hugs, she wrote. “They will help you, too.”

Fred McFeely Rogers of the Mr. Roger’s Neighborhood series once featured in a PBS video titled Helping Children with Scary News, where he said that when he was a boy and saw scary things on the news, his mother would say to him, “Look for the helpers. You will always find people who are helping.”

The PBS special states that children “need to hear very clearly that their parents are doing all they can to take care of them and to keep them safe.”

“They also need to know that people in the government, in their community, and in the world, and other people they don’t even know, are working hard to keep them safe, too,” it stated.

McCarthy recommends the following websites and resources for parents.

“Talking with Kids About the News, Strategies for Talking and Listening” by PBS

“Talking to Children About Disasters” by the American Academy of Pediatrics

The City of Boston stated that Boston Public Schools are closed this week, and the Superintendent sent an email to 9,000 school staff and teachers with tips on “Helping Children Cope in Unsettling Times” by the National Association of School Psychologists.