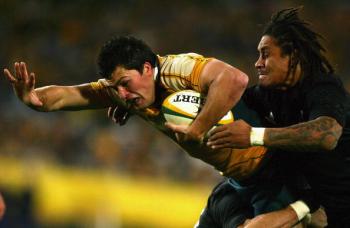 The last two victories against the two top sides in the world are the most impressive, placing the Wallabies at the top of the Tri Nations ladder – the Tri Nations is the annual tournament contested between the Australian Wallabies, the New Zealand All Blacks and the South African Springboks. The game also counted as one of the four matches that will decide the Bledisloe Cup, the trophy for trans-Tasman clashes.

The five-from-five record has added to the already impressive Deans reputation – before coaching the Wallabies he was the coach of the most successful Super 14 side, the Crusaders from New Zealand. Deans is widely considered to be the best coach in the world.

However, he was controversially overlooked for the All Blacks job this year – the New Zealand

Rugby Union decided to stick with Graham Henry, who coached the All Blacks during their disastrous World Cup campaign last year. Deans took the Wallabies job after his rejection by the All Blacks.

The rivalry between the two coaches was the major media focus leading into the Test, with former Wallabies’ captain, Nick Farr-Jones, saying many Kiwis were backing Australia; such was the animosity in New Zealand over the failure to appoint Deans as All Blacks’ coach.

Both coaches denied the rivalry was significant, which was half true. Neither team was playing to protect the reputation of their coaches. However, on a personal level the rivalry could not be greater. Deans, a former All Blacks player, is steeped in their tradition. His great-uncle, Bob Deans, entered rugby folk law when his try was disallowed in 1905, allowing Wales to defeat the All Blacks in their only loss on the 35-match tour of Great Britain. Surprisingly, the controversy over the “Deans try” continues.

Now, 100 years on, Robbie Deans has been responsible for another significant All Blacks loss. In fact, “Dingo” Deans is so loyal to New Zealand that he initially rejected the Wallabies coaching job – the closing date for applications pre-dated the announcement of the All Blacks coaching position.

When he failed to gain that appointment, the head of the Australian Rugby Union, John O’Neill, allowed Deans to make a late application for the Wallabies job. The rest is history.

This Saturday August 2 the Wallabies again play the All Blacks, this time in Auckland, where the All Blacks will be bolstered by the return of their captain, the brilliant openside flanker, Richie McCaw. With the home advantage, a New Zealand victory is expected. However, Australia has exceeded expectations under the Deans’ regime – and may well do so again in Auckland.