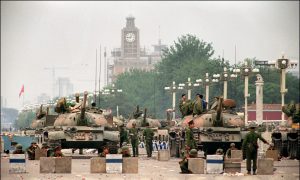 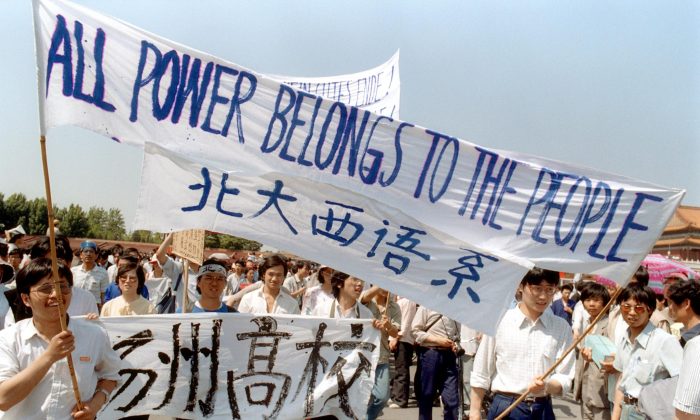 A 25 May 1989 file photo shows students waving banners as they march in Beijing streets near Tiananmen Square during a rally to support the pro-democracy protest against the Chinese government. (Catherine Henriette/AFP/Getty Images)
China

When I asked my wife, who is Chinese, to see whether some of her friends would be willing to speak with a Western reporter about the 1989 Tiananmen Square massacre, she snapped her head around and blurted out: “Are you nuts?!”

A question like that, she said, would be the fastest way to put a friendship on ice.

The regime-ordered slaughter of hundreds, or perhaps thousands, of Chinese people 26 years ago is not really a topic of conversation among Chinese youth today. In private, one approaches it with the utmost circumspection; in public, not at all.

Even getting Chinese to talk about how they talk about the massacre—not what they think happened, or who was right and who was wrong—has its peculiarities. None of those I spoke with permitted their names to be used, for instance.

Others would not speak directly to me, but only through a friend already known to them. One even agreed with the idea that there should be restrictions of speech on the topic.

Until traveling to the United States and Googling the topic, my wife was one of the truly ignorant. Once, in response to an inquiry about the massacre by a traveling foreign tourist, she asserted that the government was merely restoring stability after violent unrest by radical students—and anyway, it was none of your business. It was “like a mother smacking her unruly child.”

A young man who works in the international department of a major state-run company, when asked for his view on the incident, said the kind of thing that one would say if there was a political commissar on the other side of the mirror glass.

“I’m a Party member, and I side with the Party. Those extreme young people were instigated by hostile foreign forces in an attempt to split China,” he wrote on WeChat, a popular social media app, before dialing it up a notch. “My Party took the correct action at the correct time and strangled those evil forces in their crib.”

Then he added the Chinese phrase that equates to a wink and a nudge: “You know.”

The phrase, “ni dongde” in Mandarin, was first popularized by Lu Xinhua, representative for the Chinese People’s Political Consultative Congress, when asked in March 2014 whether Zhou Yongkang, the Party’s former security czar, was indeed under disciplinary investigation. Lu’s response equated to an admission that Zhou was, without actually providing the admission. Everyone was in on the joke.

And it is precisely this form of political discourse that is so exemplified by the place of the Tiananmen Square massacre in the public sphere: you don’t say it, but everyone knows it. Except it’s no joke.

Saying the wrong thing about the Tiananmen Square massacre has landed people in jail, while others who call for accountability around the massacre are harassed, put under house arrest, or forced to go on “vacations” in the weeks and days leading up to the June 4 anniversary.

This is a dilemma for both the Party and for the public. The regime in some ways wants the youth to forget about the massacre—but it also wants them to know that something terrifying happened, and that they shouldn’t talk about it. A kind of dead zone of thought and speech.

“The Communist Party doesn’t really want people to completely forget about it, like it didn’t happen, like it was before June 4. How would that do?!” said Hu Ping, a veteran democracy activist, at an event commemorating the massacre held in Flushing, New York, recently.

His point is that before 1989, the young generation was fearless, generally unaware of the Party’s capacity for extreme political violence, and had grown up in the relatively liberal post-Mao milieu of reform and progress. “Now, they’re unhappy with the Party, but they won’t protest. Their terror hasn’t faded.”

For some, it has a little. A group of Chinese exchange students recently penned a letter to the regime, demanding transparency around the events of June 3 and 4, when thousands of People’s Liberation Army soldiers marched on Beijing and gunned down protesters. “This piece of history has been so meticulously manipulated and blocked for so long that many people know little of it,” the letter said.

The official response was telling. Global Times, a nationalist tabloid run by the official Party mouthpiece People’s Daily, published an editorial that accused the signatories of having been “brainwashed” during their sojourns overseas. A few days later, an urgent notice was sent out ordering the piece be deleted from all official websites, according to China Digital Times, which tracks such propaganda notices.

Chen Chuangchuang, one of the signatories of the letter, at the democracy event on Tuesday said, “The authorities claim that a consensus has been reached on the June 4 question. This is really shameless. How did they get the consensus? They used violence and media control. You can’t criticize them or you get thrown in jail. But if you want to praise them, they won’t let you either. They just don’t want you to discuss it.”

Hu Ping said that ideally for the regime, the issue will remain a forbidden topic, yet not forgotten. “They want people to remember the terror, but they want them to forget their righteous indignation.”

The absence of “righteous indignation,” as Hu Ping put it, seems indeed evident among many young people.

A thoughtful Chinese undergraduate, studying statistics at a prestigious university in the United States, said it was important that those of his generation gain an objective and balanced view about “June 4th,” as it is usually called in Chinese. He agreed to speak as long as his name was not used. We will call him John.

John is of the view that “we need to give the public and the government time to reflect.” He believes that 10 to 20 years from now, the Party will start allowing discussion on the matter, a version of it will appear in textbooks, and a revised official verdict will emerge. “We have to give the Party time and patience to accept mistakes, or poorly made decisions.” He is OK with that.

John has actually taken the time to find out about what happened, having spent hours reading material and watching documentaries about the protests and the massacre, including the three hour epic “Gate of Heavenly Peace,” directed by filmmaker Carma Hinton and Australian sinologist Geremie Barmé.

His view is that essentially the students attempted to “taste an unripe fruit,” as famously put by student leader Han Dongfang.

In China, he has only ever spoken to people he was very close with—for example, a former Chinese teacher whom he had known for years, and who was subject to the brainwashing classes held for months in the wake of the massacre. Such caution is due to the fact that he cannot otherwise be sure that the people he is talking to are not spies sent by the Party, he said.

Despite the obvious frustrations of these restrictions, John in fact supports them. He said that the recent letter by overseas students was “concerning” and “extreme.” “If we suddenly opened up or revealed the so-called truth about historical events, there’s a kind of risk that people will go to the other extreme.”

What’s that? Anti-Party speech, of course. As our conversation progressed, it became clear that the freedom to discuss the June 4 massacre is coequal with the freedom to discuss the legitimacy of the Chinese Communist Party itself. And as long as the Party is the only game in town, speech that calls the Party into question, John said, should not be allowed. He made the point not out of any particular allegiance to the Party itself, it seems, but simply as a result of having internalized its own self-justifying narratives.

When the irony was noted to him that even this argument—ultimately the most considered kind of support one can give the regime—would not even be allowed to be made in China, he readily agreed. “If you say you support the students, then that’s dangerous. And if you say you completely support the Party on its decision, then that’s also dangerous. In China, I am very cautious about this type of debate.”