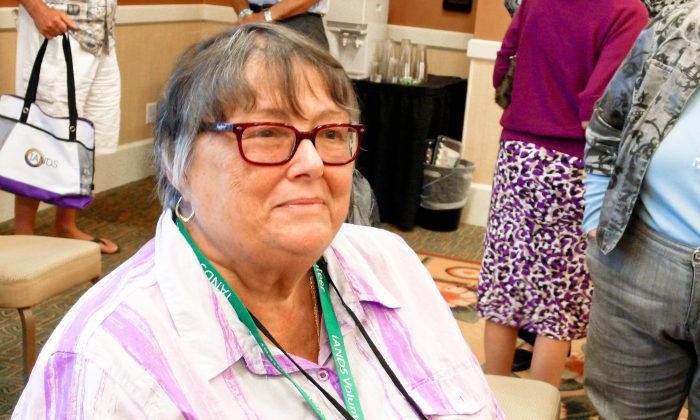 Diane Corcoran, R.N., Ph.D., and retired U.S. Army colonel, poses after a discussion about near-death experiences among soldiers as part of the IANDS 2014 Conference in Newport Beach, Calif., on Aug. 8, 2014. (Tara MacIsaac/Epoch Times)
Beyond Science

“I’ve got to tell you this,” he said earnestly and urgently. “Please believe me, this is real.” He described what Corcoran has come to know as a common near-death experience (NDE)—essentially a profound experience spurred by a brush with death.

NDEs are as varied as the people who have them, though some common traits include seeing dead loved ones, encountering angels or other transcendental beings, feelings of lightness and euphoria, and being able to view one’s own physical body from outside of it. Some NDEs are also terrifying and traumatic for various reasons.

Studies in the United States, Germany, and Australia have shown that anywhere from 4–15 percent of the general population have had some form of NDE. Soldiers experience so much trauma and are so much more likely to have encounters with death that Corcoran estimates more than 15 percent and even close to half may have had NDEs.

She’s listened with an open ear as a military insider for some 40 years; a lot of soldiers have confided in her, many with trepidation.

“My belief is … they could heal themselves of some of the issues they have if someone was there to support them, to validate their experience,” Corcoran said during a discussion at the International Association for Near-Death Studies (IANDS) 2014 Conference in Newport Beach, Calif., on Aug. 30.

Corcoran is the current president of IANDS, and she has seen the comfort, hope, and sense of purpose many have gained from their NDEs. On the other hand, for soldiers an NDE can become one of many traumatic experiences if they feel the NDE shows they are mentally unstable. The NDE may become something they feel ashamed of, something they must deal with on their own.

When the young man in Vietnam told her of his experience, she knew that, “This was really emotional for him, this was really important for him.”

“I intuitively knew that people were walking out of hospitals everyday having had NDEs and never having a soul to talk to,” she said. “In the military at least, it was my goal that … military nurses and doctors would do this.”

She spoke about NDEs loud and clear throughout her years in the military and even became known as the “Death and Dying Lady.” Corcoran has spoken at veterans’ meetings, hospitals, and similar forums. While awareness of NDEs and their role in a soldier’s mental health has taken “baby steps,” Corcoran said, many professionals treating soldiers wouldn’t know to differentiate an NDE from a psychiatric break.

People are terrified of seeming crazy if they talk about their NDEs, Corcoran said. She has been trying to find a soldier to discuss his or her NDE on camera to make a film and raise awareness. All have refused, worried they could lose benefits or their security clearance could be compromised if they appear mentally unstable.

Gathering data about military NDEs is difficult due to this unwillingness to open up, Corcoran said. She can only make educated guesses as to the number and impact of NDEs in the military. She continues to inspire confidence in experiencers, many of whom feel more comfortable opening up to a retired colonel than to someone outside of the military.

When she worked as a military nurse for 25 years, she didn’t necessarily bring up NDEs with those she cared for. She just listened. “You have to have time, you have to have some ability to sit and look into their eyes and say, ‘I’m here, I’m interested. Tell me about your experiences … You can tell me anything, I’m here to support you.'”

During Operation Desert Storm in the 1990s, she was working at a 300-bed hospital that had to become a 1,000-bed hospital within a couple of days. She gave a talk to the medical staff and told them to be prepared for soldiers discussing NDEs. She gave advice on how to help those soldiers cope.

That she continued to climb in rank over the years and to give talks to military personnel on NDEs shows that soldiers can openly believe in and discuss NDEs.