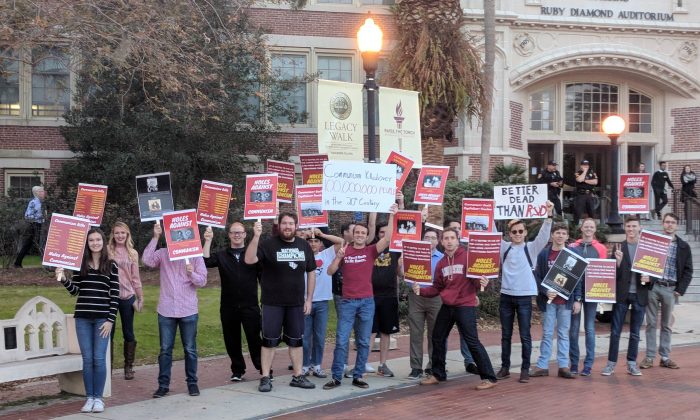 Students at Florida State University protest an appearance on campus of the communist political activist and academic Angela Davis, in Tallahassee, Fla., on Jan. 16, 2018. (FSU College Republicans)
The Dead End of Communism

Communist Angela Davis ran into some unexpected “resistance” recently at Florida State University (FSU), which spent $31,000 to bring the former Lenin Peace Prize winner to FSU for a talk to students about revolution. About 20 members of the College Republicans protested her appearance with chants of “Hey Hey Ho Ho Communism has got to go” and signs proclaiming “Noles Against Communism” and identifying 100 million deaths from communist ideology.

“Noles” is shorthand for Florida State Seminoles and applies to students, athletes, or graduates from the prestigious public college in the state of Florida.

The total $31,000 cost of the event was disclosed in documents released to this writer under the Florida Public Records law. A limousine was included for Davis. Browning Brooks, assistant vice president for university communications, said, “I’m told that FSU was not permitted by contract to film, record or photograph this presentation in any manner.”

But according to a report in a local paper, the Tallahassee Democrat, Davis turned the concert hall where she spoke into “a political science classroom” and “reminded her overflow audience that the revolution isn’t over yet.” Before she became a professor of consciousness and feminist studies, Davis was associated with the Moscow-funded Communist Party USA.

The controversy has drawn renewed attention to perceived liberal-left domination of major American colleges and universities. Davis is one of the most popular speakers during Martin Luther King Jr. celebrations and Black History Month on college campuses.

Before she became a professor of consciousness and feminist studies, Angela Davis was associated with the Moscowfunded Communist Party USA.

FSU College Republican Chairman Landon Schneider drew a distinction between King, a proponent of nonviolent civil disobedience, and Davis, who was on the FBI’s Most Wanted List for her alleged involvement in a kidnapping and murder. She was acquitted of the charges in 1972 after Soviet propaganda on a worldwide basis depicted her as a political prisoner. Davis was also associated with the Black Panthers, a group that referred to police as “pigs” and engaged in firefights with Oakland police in 1967 and 1968, killing one officer and wounding two others.

“She spreads a communist agenda that is clearly not what our government and Founding Fathers wanted,” Schneider said. He and other members of his group decided to issue a press release, print up signs, and then organize a demonstration outside the campus auditorium where Davis was speaking.

The official description of the Jan. 16 event during Martin Luther King Jr. birthday week described the former Communist Party vice-presidential candidate as an activist, educator, and scholar who “has been instrumental in movements for social justice around the world.”  But College Republicans researched Davis’s controversial background and issued a statement declaring that, “While we support Ms. Davis’s right to speak freely, we are vehemently against the University using student tuition to sponsor an individual who supports communist regimes that have been directly responsible for the deaths of millions of innocent people.”

Her receipt of the Lenin Peace Prize was recorded in an Associated Press video that is now posted on YouTube. Davis hugs a communist official and pays tribute to the Soviet revolution, with a bust of Lenin in the background.

In addition to her involvement with the Black Panthers and world communist movement, Davis was a public supporter of the People’s Temple, run by Marxist preacher Jim Jones, which staged a mass “revolutionary suicide” in Guyana in 1978 that cost the lives of some 900 followers. Members of the group also killed a visiting member of Congress, Rep. Leo Ryan (D–Calif.), who was investigating human rights violations by Jones.

Davis had referred to “my friend Jim Jones and all my sisters and brothers from Peoples Temple” who were in Guyana and fighting against oppression and racism. She said, “I know you are in a very difficult situation right now and there is a conspiracy—a very profound conspiracy designed to destroy the contributions which you have made to our struggle.”

Schneider said he learned that people involved in the Student Government Association, the campus speaker’s bureau known as the Golden Tribe Lecture Series, and possibly the college administration were involved in the decision to sponsor Davis.

The FSU president is John Thrasher, a Florida State University alumnus and former Republican state legislator. A letter asking what he knew about Davis’s background has gone unanswered.

In advance of their protest of Davis, the FSU College Republicans attacked the university authorities for arranging a one-sided presentation. They declared, “With the University’s history of consistently hosting liberal ‘Golden Tribe’ lecturers such as Dr. Marc Lamont Hill, Dr. Neil deGrasse Tyson, Melissa Harris-Perry, and self-proclaimed ‘scientist’ Bill Nye, it is not surprising that they would continue to further the ideological imbalance on college campuses instead of presenting a balance of liberal and conservative viewpoints.” The Golden Tribe is a  lecture series sponsored by the Student Government Association.

Schneider said protesters were quarantined in a special area and were not permitted to approach any people waiting in line to see Davis.

The FSU authorities arranged the Davis appearance through the Lavin Agency speakers bureau, which advertises Davis as someone who believes in “liberating minds as well as liberating society.” Lavin Agency stated, “Her work as an educator—both at the university level and in the larger public sphere—has always emphasized the importance of building communities of struggle for economic, racial, and gender equality.” Nothing is said in the promotional materials about her commitment to communism.

One requirement for the Davis appearance was that she was a “strict vegan” who could not be served any meat and was also “gluten-free.” Davis has described animals as “sentient beings who endure pain and torture as they are transformed into food for profit, food that generates disease in humans whose poverty compels them to rely on McDonald’s and KFC for nourishment.” The group People for the Ethical Treatment of Animals has called Davis a “liberation icon” who has highlighted “the connection among all forms of exploitation and oppression.”

However, Davis has mostly focused on criminals as alleged victims of capitalism, urging the complete abolition of prisons through the group Critical Resistance, funded in part by billionaire George Soros.

Cliff Kincaid is a writer and broadcaster based in the Washington, D.C. area. He can be reached at Kincaid@comcast.net