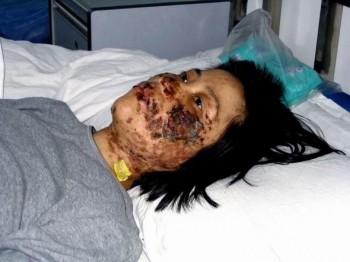 On Oct. 9, the same day that the Chinese State Council issued white papers titled “Judicial Reform in China,” a press conference was held at 10 a.m. where Jiang Wei, the office head of the Central Leading Group for Judicial Reform, discussed information on the white papers and answered reporters’ questions.

At the press conference, a reporter with the German newspaper Die Welt (The World) brought up the issue of China’s labor camp system, pointing out that the system was not addressed in the White Paper and asking why the problems existing in the labor camps have not yet been resolved despite many representatives of the People’s Congress advocating for its abolishment.

“We have come to a common agreement on labor camp reforms,” he said. “Relevant departments have conducted large amounts of research and taken the advice of experts and representatives of the People’s Congress in order to come up with a specific action plan.”

Critics say that the labor camp system disregards human rights and makes it convenient for police to abuse their power. In 2009, around 190,000 Chinese people were held in 320 labor camps nationwide, with another 1.6 million people in prison.

Originally established in the 1950s to suppress opponents of the government, the labor camp system today allows police to detain victims for three years without trial and to add another year if detainees “misbehave,” in the eyes of the Party.

Although the system is often used to punish drug abusers, prostitutes and other accused of misdemeanor crimes, it is also used to persecute political dissidents and Falun Gong practitioners.

Guo Jun, the editor-in-chief of the Chinese editions of The Epoch Times, was invited to speak at the 21st Session of the United Nations Human Rights Council, where she noted that: “In our investigation we found that prisoners, detained in labor camps and jails, were almost the sole source of transplant organs in China. The vast majority were practitioners of Falun Gong, a Chinese spiritual practice.”

Arne Schwartz, a researcher of forced organ harvesting in China, said that informed estimates give the number of Falun Gong practitioners killed for their organs at 65,000. The organs were often harvested from the practitioners’ bodies before they died.