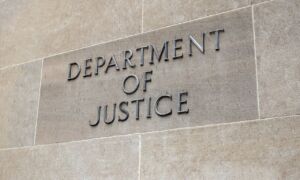 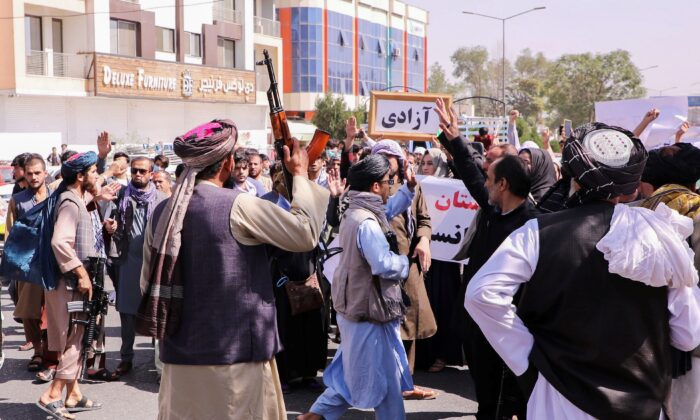 Taliban fighters try to stop protesters, as they shout slogans during an anti-Pakistan protest, near the Pakistan embassy in Kabul, Afghanistan, on Sept. 7, 2021. (Stringer/Reuters)
Afghanistan

Taliban Won’t Work With US to Contain ISIS After Terrorist Attacks: Spokesman

The Taliban won’t cooperate with the United States to contain the ISIS terrorist group after it claimed responsibility for a bomb attack that killed dozens of people in the northern city of Kunduz last week, according to a spokesman for the extremist group.

Suhail Shaheen, a spokesman for the Taliban, said in an interview Saturday that there will be no talks or coordination with Washington on how to deal with ISIS after the group’s regional affiliate took responsibility for the Kunduz Mosque attack, along with other bombings in recent weeks.

“We are able to tackle Daesh independently,” Shaheen told The Associated Press on Saturday, using an Arabic term for ISIS.

Late last week, ISIS claimed responsibility for a suicide attack that left 46 people—namely adherents of Shia Islam—dead in Kunduz. The individual who was behind the attack was described as a Uyghur Muslim, the group said.

That bombing, according to the U.N. mission in Afghanistan, is “part of a disturbing pattern of violence” and is now the third “deadly attack this week apparently targeting a religious institution.”

Shaheen’s remarks over the weekend come as the United States and the Taliban, itself a designated terrorist group, held talks on their countries’ relationship, according to an Afghan diplomat. The discussions were held in Qatar.

Mullah Amir Khan Muttaqi, Afghanistan’s acting foreign minister, told Al Jazeera that his delegation is seeking humanitarian aid as well as the lifting of restrictions on the country’s central bank.

But Muttaqi told news outlets over the weekend that his delegation told the United States that it should not try to “destabilize” the government in Afghanistan.

“Good relations with Afghanistan are good for everyone. Nothing should be done to weaken the existing government in Afghanistan, which can lead to problems for the people,” he said in a recorded statement, which was translated by the AFP news agency.

As Afghanistan’s economy teeters on the verge of collapse, Muttaqi said the Taliban will hold meetings with other countries.

“We are trying to have such meetings and gatherings with the U.S. and other countries of the world and to discuss the current situation in Afghanistan, listen to one another’s opinions,” he remarked, according to AFP. “The issues that people of Afghanistan are facing in terms of economy or any other issues should be resolved. The existing government of Afghanistan is committed to having good relations with other states and cooperate with others, to facilitate its people, and provide them services.