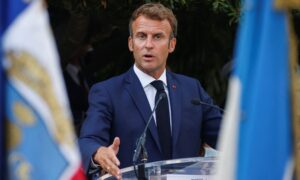 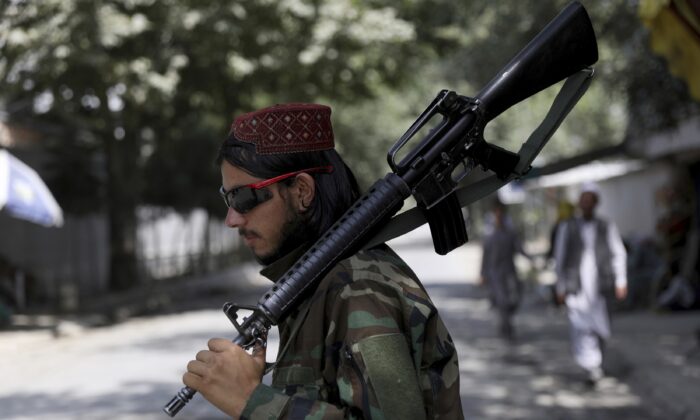 A Taliban fighter stands guard at a checkpoint in the Wazir Akbar Khan neighborhood in the city of Kabul, Afghanistan, on Aug. 22, 2021. (Rahmat Gul/AP Photo)
Afghanistan

The Taliban terrorist group has warned that some sort of action will be taken if the United States doesn’t fully withdraw from Afghanistan by its self-imposed deadline.

President Joe Biden announced in July that the United States’ mission in Afghanistan “will conclude on August 31st.”

That deadline is now being emphasized by the Taliban, which took over the country this month from U.S.-backed Afghan forces.

“It’s a red line. President Biden announced that on 31 August they would withdraw all their military forces. So if they extend it, that means they are extending occupation while there is no need for that,” Suhail Shaheen, a Taliban spokesman, told Sky News.

“If the U.S. or UK were to seek additional time to continue evacuations—the answer is no. Or there would be consequences. It will create mistrust between us. If they are intent on continuing the occupation, it will provoke a reaction.”

“We’ve seen the public statements by the Taliban spokesman. I think we all understand that view,” Pentagon spokesman John Kirby told reporters in Washington on Aug. 23.

Biden, speaking at the White House on Aug. 22, said discussions are occurring among administration and military officials about extending the self-imposed deadline.

“Our hope is we will not have to extend, but there are going to be discussions, I suspect, on how far along we are in the process,” he said.

He also said U.S. officials have “discussed a lot with the Taliban” and that the group has “been cooperative in extending some of the perimeter” around the Hamid Karzai International Airport in Kabul, although he doesn’t trust them.

In the event that allies ask for U.S. troops to stay beyond the deadline, Biden said he would tell them “that we’ll see what we can do.”

Some members of Congress have urged Biden to push back the self-imposed deadline.

“The Aug. 31 deadline must be pushed back. That entails risk, since I understand it was negotiated with the Taliban. But these are the tough choices confronting us,” Rep. Elissa Slotkin (D-Mich.) said on Aug. 23.

On Aug. 22, Sen. Tom Cotton (R-Ark.) called on Biden to stress to the Taliban that the United States wouldn’t leave any American behind in Afghanistan.

“President Biden must make it clear to the Taliban that we will not leave until every American has been safely evacuated,” he said.

Crowds of Americans, Afghans, and others have been trying to reach the U.S.-held airport to evacuate before U.S. troops withdraw, fearful of the Taliban and the sharia law they plan to impose on the country.

Taliban terrorists have been captured on camera beating or killing Afghans and U.S. military officials, with it being confirmed over the weekend that some Americans have been beaten.

The United States is openly cooperating with the Taliban, claiming that its fighters are letting everybody with a U.S. passport through checkpoints to the airport.

Taliban fighters control the grounds outside of the facility.

U.S. officials haven’t said if the Taliban will face consequences for assaulting Americans. Biden said on Aug. 22 that he would support sanctions against them, depending on their conduct, as UK officials call for such sanctions.

“There have been incidents of people having some tough encounters with Taliban. As we learn about those incidents, we will certainly go back and engage the Taliban leadership and press home to them that our expectation is that they allow our people with the appropriate credentials to get through the checkpoints,” Defense Secretary Lloyd Austin said on ABC’s “This Week” on Aug. 22.

The U.S. military had resisted calls to execute missions into Kabul to rescue stranded Americans, but have since conducted at least such one mission. Biden indicated that others will take place.

“Our first priority in Kabul is getting American citizens out of the country as quickly and as safely as possible. At my direction, the State Department continues to reach out to the remaining Americans we have identified by phone, e-mail, and other means to ascertain their whereabouts and their plans. We’re executing a plan to move groups of these Americans to safety and to safely and effectively move them to the airport compound,” he said.

“For security reasons, I’m not going to go into the detail of what these plans entail, but I will say again today that I have said before: Any American who wants to get home will get home.”

To help with the evacuations, the Biden administration has activated 18 aircraft from private companies to fly evacuees from airports they were flown to from Kabul.