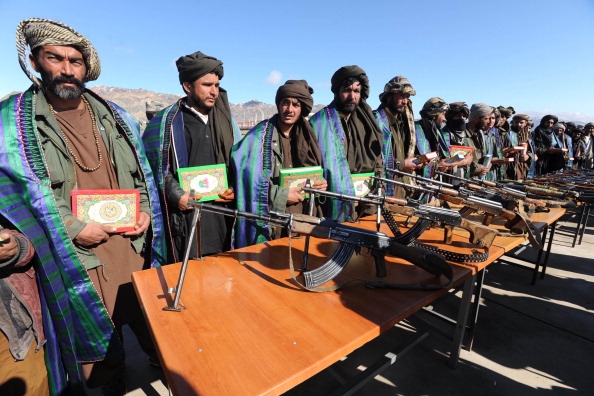 Taliban fighters stand with their weapons as they hold the Muslim holy book Koran after they joined Afghan government forces during a ceremony in Herat province on January 30, 2012. (Aref Karimi/AFP/Getty Images)
World

Taliban Wants Talks With US, Not Afghanistan

Taliban officials do not want to meet with representatives of Afghan President Hamid Karzai’s government despite having met with U.S. officials for peace talks, according to CNN.

Taliban spokesperson Zabiullah Mujahid told CNN that the militant group has “never been asked to attend talks with Karzai administration officials in Saudi Arabia, but even if we are asked to attend, we won’t because (the) Karzai government is a puppet and unauthorized.”

“Meeting with them will not be beneficial in solving the issue,” Mujahid said, adding that the Taliban wishes to meet with the one “who is powerful and has got the power to make a decision,” which is the United States, not Karzai’s government.

However, Karzai may press for a meeting between himself and Taliban leaders in Pakistan at the behest of Islamabad. “We hope that Pakistan will arrange a purposeful meeting between us and so that we find a solution to our own problems,” an Afghan official told Reuters.

“Pakistan has paid little attention to our concerns and the level [of] cooperation has not been sincere or honest so far,” the official added.

U.S. authorities have attempted to hold peace talks in secret with Taliban officials over the past year.

“The trust-building phase is totally up to Americans,” Mujahid told CNN, “and they have to take measures” to meet the Taliban’s conditions.