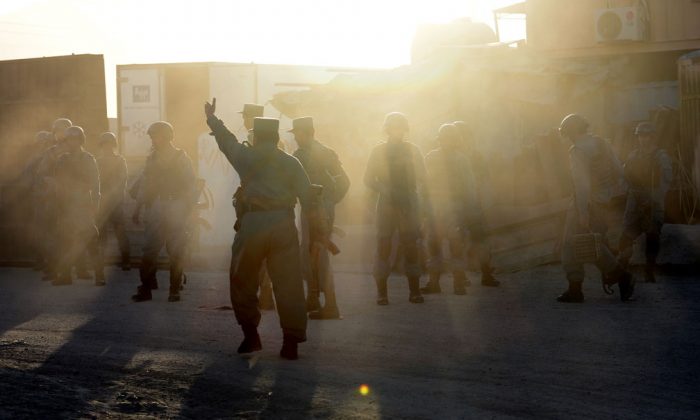 Afghan policemen take position near Kabul military airport in Kabul on June 10, 2013, during a clash between insurgents and Afghan security forces. Taliban insurgents claimed responsibility for the continuing attack on Kabul airport on Monday, saying that military facilities had been targeted by gunmen. (Massoud Hossaini/AFP/Getty Images)
Opinion

Taliban Victory in Afghanistan Would Pose Problem for Pakistan

As the world awaits the outcome of the Afghan elections and the beginning of NATO withdrawal, it’s generally assumed that Pakistan would welcome Taliban victory in post-2014 Afghanistan. This assumption is based on the perception that Pakistan supports the Taliban, yet a deeper look into intertwined demographic makeup of the two neighbors, the rugged geography and long history of conflict might lead to another conclusion.

The Pashtun make up about half of Afghanistan’s population and have long regarded themselves as the “core” of their ethnic homeland. But that only tells part of the story. The Pashtun nation consists of around 42 million, and only 14 million live in Afghanistan with the rest living in Pakistan, where they represent about one sixth of the population. The Pashtuns straddle both sides of the Durand line, the international border between the two countries, which Afghanistan has never recognized. The Pakistani Pashtun areas now are the center of revolt against the Pakistani state. During the proxy war between the Soviet Union and the United States in the 1980s, Pakistanis were encouraged by the United States to allow the Mujahidin to seek refuge in Pashtun areas of Pakistan – the very areas devastated by the US-NATO and the Pakistani military campaigns against the Taliban insurgents. These areas have borne the brunt of the US drone attacks.

Pakistan treads a delicate tightrope. The Pakistani state is not hostile to its Pashtun population and has considerably sympathy towards the Afghan Pashtuns struggle to regain political power in Afghanistan. Given that Afghan Taliban are the most powerful Pashtun group, Pakistan has sought political alliance to appease Pakistani Pashtun and prevent more Pashtun from joining the Taliban insurgency in Afghanistan or Pakistan. Pakistan also seeks such an alliance to have political and strategic influence in the post-2014 political configuration of Afghanistan. At the same time Pakistan does not want the Afghan Taliban as a sole political power in Afghanistan because that would encourage Pakistani Taliban to resurrect the old Afghan dream of Pashtunistan uniting the Pashtun of Pakistan and Afghanistan, this time led by Taliban under the banner of jihad.

Pakistan recognizes that the Taliban must share power with other ethnicities, including Tajik, Hazara and Uzbek, for an effective and enduring peace in Afghanistan. Pakistan does not want to see the resurgence of ethnic conflicts in post-2014 Afghanistan that would threaten the territorial integrity of Afghanistan and may also threaten Pakistan’s national and territorial integrity. These considerations have given rise to competing imperatives in Pakistan’s Afghan policy which it seeks to reconcile. The statement by Pakistan’s national security advisor Sartaj Aziz, that “Pakistan does not have favorites in Afghanistan,” reflects this realization.

Overlap: Afghanistan and Pakistan together have about 42 million Pashtuns. (YaleGlobal)

This position has also been enunciated in a 2013 official strategy report on counterterrorism of the provincial Khyber-Pakhtunkhwa government: “… the common discourse on the issue to which a substantial portion of our intelligentsia, political leadership and other stakeholders subscribe is that militancy will cease in Pakistan and Khyber-Pakhtunkhwa once the foreign troops leave Afghanistan … This is a fallacy. It will not happen….” According to the report, while Pakistan seems to prepare itself for possible civil war and chaos in the absence of a political settlement in the post-US withdrawal scenario, there is still no understanding about the likely implications for Pakistan if the Afghan Taliban gain full or partial control in their country.

The basic elements of Pakistani policy after the US withdrawal from Afghanistan at the end of 2014 are clear. Pakistan does not want the Taliban to win exclusive power and wants a peace settlement in Afghanistan based on power sharing between the Taliban and the non-Pashtun ethnic groups of Afghanistan. This is evident from the fact that Pakistan government agencies including the military have urged the Afghan Taliban to join the peace negotiations and made it clear to former leaders of the Northern Alliance that Pakistan no longer supports its strategy of the 1990s. French intelligence organized a meeting in Paris in December 2012, and the Taliban, leaders of minority ethnic groups in the north and west, the Pakistan military and its powerful Inter-Services Intelligence held their first productive dialogue about the future of Afghanistan. In that meeting Pakistani military had stated that ending extremism in Pakistan was its main aim, rather than opposing India or trying to exert influence in Afghanistan.

This policy is driven by the calculation that victorious Taliban may pose threat to Pakistan by collaborating with Pakistani Taliban for a Pashtunistan incorporating Pakistan’s Pashtun territory. Pakistan has also recognized that in order to avoid the dreadful experiences of the last 40 years Afghans must chart a course for lasting peace by themselves through accommodating demands and legitimate concerns of all major Afghan ethnic groups. The past experience which involved one or the other ethnic group being supported by an outside power has delivered nothing but distrust and destruction. And these interventions, besides creating barriers for intergroup cooperation, have not served the long-term interests of the outside powers – the Soviet Union and the United States in 1980s and Pakistan in 1990s. If India decides to replace the United States after the withdrawal, it will arrive at the same conclusion.

Pakistan also recognizes that Afghanistan’s post-2014 survival depends on continued Western foreign aid. Almost 90 percent of the Afghan National Army budget this year will come from US and other foreign donors, totalling more than the entire Afghan government budget. The Afghan state hardly collects any income tax. Most revenue comes from tariffs on imports brought in by Western-funded spending. Without this help, the Afghan state would collapse. Pakistan is urging Afghanistan to sign the long-term military pact with the United States. In the absence of such an agreement, Afghanistan faces the prospects of no state at all – opening a floodgate of ethnic violence and anarchy; destroying a weak and corrupt but, however flawed, inclusive Afghan state for which the United States has fought the longest and costliest war in its history.

There is another dimension bearing on Pakistan’s Afghan policy calculations: With the exception of certain sections of Pakistan’s powerful Inter-Services Intelligence organization that have assisted the Taliban since the early 1980’s, Pakistan’s rulers and Afghan Taliban are extremely wary of each other. Many Pakistanis are deeply suspicious of the Taliban’s ethnic and religious fanaticism and Afghans in general. For the Taliban, the Pakistani state and military and non-Pashtun Pakistanis in general, are decadent, corrupt, treacherous, brutal and greedy oppressors. Each regards the other as inherently unreliable. These perceptions mean that Pakistan cannot impose a solution on the Taliban contrary to their interests, and that poses a significant hurdle for Pakistan to achieve its Afghanistan policy objectives.

Riaz Hassan is visiting research professor at the Institute of South Asian Studies, National University of Singapore, and emeritus professor of sociology, Flinders University, Australia. His most recent books are: Life as a Weapon: The Global Rise of Suicide Terrorism (Routledge 2014) and Islam and Society: Sociological Explorations (Melbourne University Press 2013). The article is based on the research to be published in the book Post 2104 Afghanistan later this year.

With permission from YaleGlobal Online. Copyright © 2014, Yale Center for the Study of Globalization, Yale University.