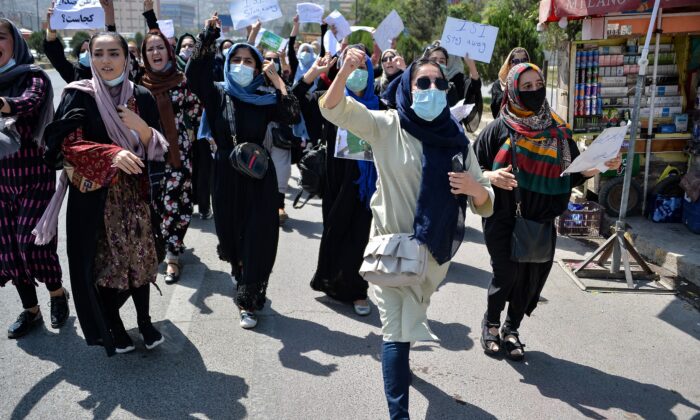 Afghan women shout slogans during an anti-Pakistan protest rally, near the Pakistan embassy in Kabul on Sept. 7, 2021. (Hoshang Hashimi/AFP via Getty Images)
Afghanistan

The Taliban terrorist group fired a volley of gunfire into the air on Tuesday to disperse a large protest that was held in Kabul, while also arresting several journalists who covered the demonstration, according to reports.

Thousands of Afghan men and women rallied in the streets of the Afghan capital to protest against the Taliban and what they characterized as neighboring Pakistan meddling in the affairs of the Middle Eastern nation and allegedly supporting the Taliban’s return to power.

According to a video of the rally published by TOLOnews, scores of people marched in Kabul on Tuesday. Some demonstrators held placards that read “ISI stay away,” referring to Pakistan’s Inter-Services Intelligence (ISI), which is believed to be supporting the Taliban and laying the groundwork for a new government.

Demonstrators also shouted slogans such as “Azadi [freedom or liberty]” and “Death to Pakistan” before a barrage of gunfire was heard, sending people fleeing. There were no immediate reports of injuries.

“The Islamic government is shooting at our poor people,” a female demonstrator told an Iranian television agency. “These people [Taliban] are very unjust, and they are not human at all.”

Protesters gathered outside the Pakistan embassy in Kabul to denounce what they claim as Pakistan’s interference in Afghanistan, especially Islamabad’s alleged support for the latest Taliban offensive that routed resistance fighters in Panjshir province—the last area where anti-Taliban militants have held out against the terrorist group.

‘Journalism in Afghanistan Is Getting Harder’

Several Afghan journalists who were covering the anti-Pakistan demonstration were arrested by the Taliban, according to witnesses and Afghan news agencies.

A senior reporter with Ariana News, a leading Afghan news network, said on Twitter that at least 14 journalists were detained and some of them were also beaten for covering the protest. All the journalists have since been released.

TOLOnews reported that its cameraperson, Wahid Ahmadi, was taken into custody while filming the demonstration.

The Taliban have detained TOLOnews cameraperson Wahid Ahmadi who was filming the protest today in Kabul.#TOLOnews pic.twitter.com/FhwlQk6fcb

An Afghan journalist who was among those detained and who was later freed told The Associated Press he was punished by the Taliban.

“They made me rub my nose on the ground and apologize for covering the protest,” he said, speaking on condition of anonymity for fears for his safety. “Journalism in Afghanistan is getting harder,” he added.

Since the swift takeover of Afghanistan last month, there have been reports of Taliban terrorists beating and threatening journalists. In one known case, the German broadcaster Deutsche Welle said the Taliban went door to door in a hunt for one of its journalists and shot and killed a member of his family while seriously injuring another.