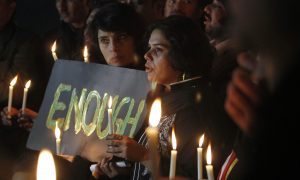 ISLAMABAD—The Pakistani Taliban warned on Friday that it would target the country’s main electrical company if it did not end power outages in the country’s south — where an intense heat wave has killed 866 people in the past week.

In a statement released Friday, Mohammad Khurasani, a spokesman for the Tehrik-e-Taliban Pakistan, also expressed his grief and condolences over the heat-related deaths in the southern port city of Karachi.

The chronic power cuts in the midst of a record heat wave have caused public protests in Karachi. The K-Electric company, in a statement, has blamed technical faults and surging demand for the power outages.

Khurasani’s group has been fighting to overthrow the Pakistani government and install its own harsh brand of Islamic law.

Temperatures in southern Pakistan began to drop on Thursday, fueling hopes that the worst of the heat wave has passed. But authorities said heatstroke patients were still being brought to the Karachi hospitals.