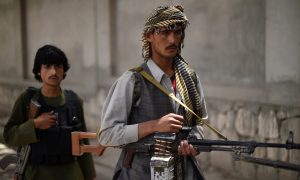 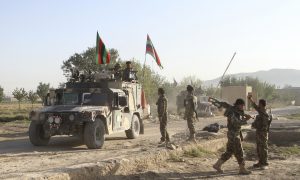 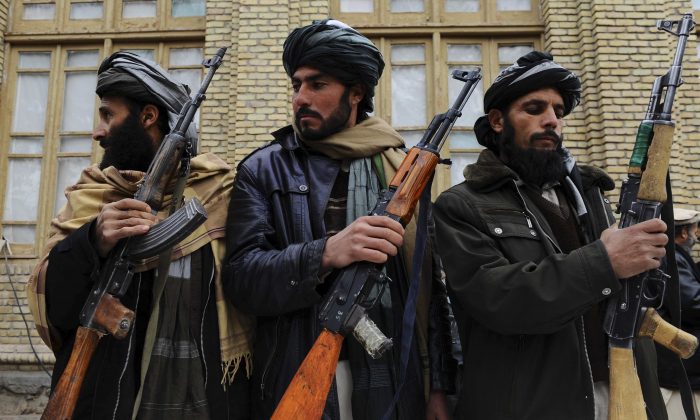 Three former Taliban fighters handover their weapons as they join a government peace and reconciliation process at a ceremony in Herat, Afghanistan, on Jan. 11, 2014. (Aref Karimi/AFP/Getty Images)
Middle East

KABUL, Afghanistan—Within hours of seizing the northern Afghan city of Kunduz last month, Taliban fighters went door-to-door, hunting down not only those accused of working with security forces, but women’s rights advocates and journalists.

Government troops took back much of the city three days later, and on Monday the Taliban announced the withdrawal of their last fighters. But the Taliban’s brief foray into the city offered a chilling reminder of its violent Islamic rule in the late 1990s, and of what could await the country if it returns to power.

In announcing their capture of the city on Sept. 28, the Taliban vowed to protect civilians and property, presenting themselves as liberators.

But residents say the insurgents immediately went on a rampage, looting shops and killing those who stood in their way. Shah Bibi fled to Kabul with her six children after militants barged into a neighbor’s home and shot dead five young boys. “The bodies lay everywhere,” she said.

Women’s rights advocates and journalists say they were singled out, and many joined the exodus from the city. The U.N. says half of the 300,000 residents of Kunduz fled. It’s unclear how many have since returned.

Fauzia, the head of a local organization devoted to women’s health, education and rights, said she hid in her basement until Taliban gunmen on a motorcycle came to the house looking for her.

“It wasn’t so much the prospect of being killed that was the biggest fear, it was being raped,” she said.

When the gunmen started trying to knock down the door — and her husband berated her for not leaving sooner — she climbed over the back fence and ran away, eventually making her way to Kabul.

During the Taliban’s 1996-2001 rule, women were banned from work and school, and could only leave home wearing the all-covering burka and escorted by a male relative. The Taliban stoned alleged adulterers, cut off the hands of thieves and dispensed violent and summary justice for violations of their harsh version of Islamic law.

“The Taliban do not believe in the values of humanity,” rights advocate Malali Rustami said. “They have no respect for humanitarian and health workers, non-government organizations, journalists, female activists — these are the people who have been targeted by the Taliban in Kunduz.”

Geeta Bashardost had worked for five years with an internationally-funded women’s center in Kunduz, meeting with mullahs and other religious leaders about equality, women’s rights and peace.

After the Taliban overran Kunduz, “the city was empty of normal people. There were only Taliban on motorbikes with their faces covered, and there were Taliban songs blasting out, who knows from where.”

She said residents helped point out the homes of activists, judges, women’s welfare investigators and others. “They had a list of people’s names, and local supporters of the Taliban — and there are a lot — helped them, telling them house by house who lived where.”

Bashardost, who was well-known in the community because of her work, knew they would eventually come for her, so she donned a burka and fled to the capital.

The Taliban also targeted the media in Kunduz, ransacking offices and stealing or destroying equipment, according to reporters who fled.

The Afghan Journalists’ Safety Committee, a private organization, has provided emergency funds and accommodation to at least 65 reporters who fled Kunduz. The group’s director, Najib Sharifi, said reporters fear “being captured, beaten or killed” by the Taliban.

“Concepts of freedom of expression and freedom of speech go against their ideology,” he said.

Parisa Aimaq, a well-known local reporter for privately-owned Khawar Television, fled rocket attacks on her neighborhood during the takeover. She said she left laptops and other materials behind, which the Taliban later seized and used to pursue her and others who worked at the station.

Like other professional women in Afghanistan, she was accustomed to threats against her life. “But things got serious when the Taliban came in,” she said, and her father sent her and two of her sisters to Kabul. A few days later, he was shot dead as he walked to morning prayers.

Afghan journalists say they are often threatened by the Taliban for not reporting claims of battlefield victories, many of which are either impossible to verify or turn out to have been wildly exaggerated.

“I was scared for my life,” said Bashir Khan Safi, a reporter with Killid Radio who fled Kunduz. “Journalists are constantly being threatened for their reporting by extremists who think we are anti-Taliban when we are trying to be balanced. And some have had threatening phone calls since leaving the city,” he said.

The Taliban’s capture of Kunduz, though brief, dealt a major blow to public confidence in President Ashraf Ghani, who was elected over a year ago on promises to end the war.

Afghan security forces have struggled to combat the Taliban since the U.S. and NATO concluded their combat mission last year, shifting to a training and advisory role. And peace talks brokered by Pakistan broke down earlier this year after the announcement of the death of longtime Taliban leader Mullah Mohammad Omar.

The attacks on the media have meanwhile spread beyond Kunduz. Two radio stations in the eastern city of Jalalabad were bombed on Saturday night after receiving threats from the Taliban, Sharifi said. No one has yet claimed responsibility for the attacks, which did not hurt anyone.

On Monday, the Taliban accused two major television stations, Tolo and 1TV, of being spies for the U.S. “invaders and their puppets” in the Afghan government, after they aired reports from Kunduz detailing atrocities committed by the militants.

Taliban spokesman Zabihullah Mujahid said in a statement that the channels would be “designated as military targets.” No staff would be safe, he said, including presenters and reporters.