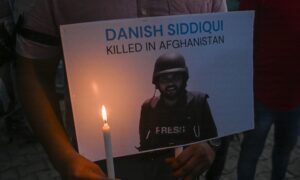 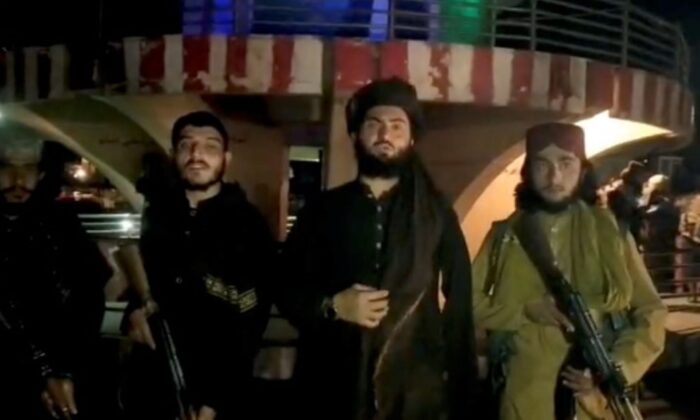 The Taliban has managed to capture nine provincial capitals in Afghanistan in just six days as U.S.-led foreign forces complete their withdrawal from the beleaguered South Asian country.

“Unfortunately, after hours of heavy fighting, the ANDSF [Afghan National Security Forces] retreated,” said Jawad Mujadidi, a provincial council member from Badakhshan. “With the fall of Faizabad the whole of the northeast has come under Taliban control,” he added.

Mujadidi said Taliban fighters laid siege to Faizabad before launching an offensive. The group now controls some two-thirds of the nation, with an offensive that started on Aug. 6 in Zaranj, the capital of Nimruz Province, which became the first provincial capital the group seized.

Wednesday’s loss of Faizabad, the capital of the northeastern province of Badakhshan, was the latest setback for the Afghan government, which has been struggling to stem the momentum of Taliban assaults. Badakhshan borders Tajikistan, Pakistan, and China.

The Taliban capture came as President Ashraf Ghani flew to Mazar-i-Sharif to rally old warlords to the defense of the biggest city in the north as Taliban forces close in.

On Tuesday, the group took control over most of Farah city, the capital of Farah Province, and the provincial capital of Baghlan, putting additional pressure on the country’s central government to stem the tide of the Taliban advance.

The seizure in Farah included the governor’s compound and police headquarters, according to TOLO News.

The Taliban is attempting to defeat the U.S-backed government and reimpose extremist Islamic laws. The speed of their advance has shocked the government and its allies.

A U.S. peace envoy urged Taliban forces on Tuesday to stop the violence and “negotiate a political settlement,” warning insurgents they won’t be recognized internationally after coming to power through force.

The U.S. State Department announced that Zalmay Khalilzad, the U.S. envoy, traveled to Qatar on Aug. 8 and will be in the country’s capital to “help formulate a joint international response to the rapidly deteriorating situation in Afghanistan,” noting that negotiation is the “only path to stability and development” in the country.

Khalilzad’s pressure on the group also follows condemnations from the international community and a similar warning from the United Nations that a Taliban government that takes power by force would not be recognized. The terrorists have so far refused to return to the negotiating table.

The Taliban has gone on the offensive in recent weeks after President Joe Biden announced the United States would withdraw from the country after remaining there for nearly 20 years. The drawdown of U.S. troops is slated to end by the start of next month, he said.

Over the past weekend, the U.S. Department of State urged any Americans who remain in Afghanistan to immediately leave the country, warning that government-sponsored flights may not be available in the near future.