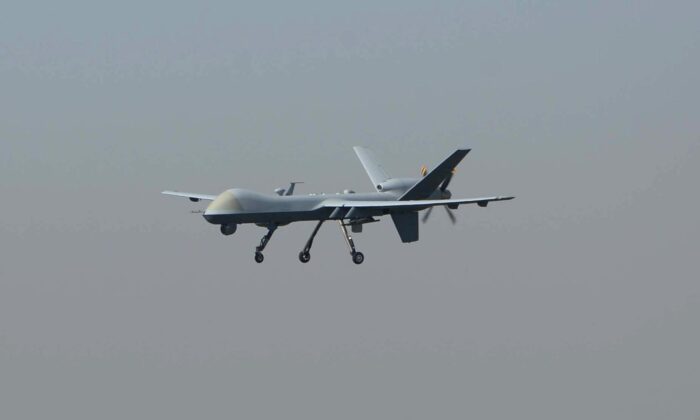 The Taliban terrorist group on Wednesday demanded the United States, among other countries, to abort its drone patrols over Afghan airspace or face “negative consequences.”

“Afghanistan’s sacred airspace is being occupied by U.S. drones,” Taliban spokesperson Zabihullah Mujahid wrote on Twitter. “These violations must be corrected and prevented.”

“We call on all countries, especially the United States, to act in the light of mutual commitments and commitments to Afghanistan … in order to prevent any negative consequences,” he continued.

Due to concern by U.S. officials over the resurgence of al-Qaeda and activities by the ISIS terrorist group in Afghanistan, the Biden administration has routinely said they will maintain over-the-horizon capabilities in the war-torn nation and monitor potential threats.

“We know that al-Qaeda is a presence, as well as ISIS, in Afghanistan, and we’ve talked about that for quite some time. We do not believe it is exorbitantly high, but we don’t have an exact figure for you,” Defense Department press secretary John Kirby previously said.

The Taliban has repeatedly said there is no evidence of ISIS or al-Qaeda terrorists in Afghanistan, making the claims just days after ISIS claimed responsibility for bomb attacks in the eastern city of Jalalabad.

Since toppling the Western-backed government in Kabul last month, the Taliban have faced pressure from the international community to renounce ties with al-Qaeda, the terrorist group behind the Sept. 11, 2001, attacks on the United States.

President Joe Biden said in August following the withdrawal of American troops in Afghanistan that the United States will continue to actively pursue terrorist groups like ISIS-K in the country, which is responsible for killing 13 U.S. service members at Kabul’s airport last month.

“We will maintain the fight against terrorism in Afghanistan and other countries. We just don’t need to fight a ground war to do it,” Biden said during his Aug. 31 speech. “We have what’s called over-the-horizon capabilities, which means we can strike terrorists and targets without American boots on the ground, very few, if needed.”

U.S. officials were not immediately available to comment on the Taliban’s claims of recent drone operations in Afghanistan.