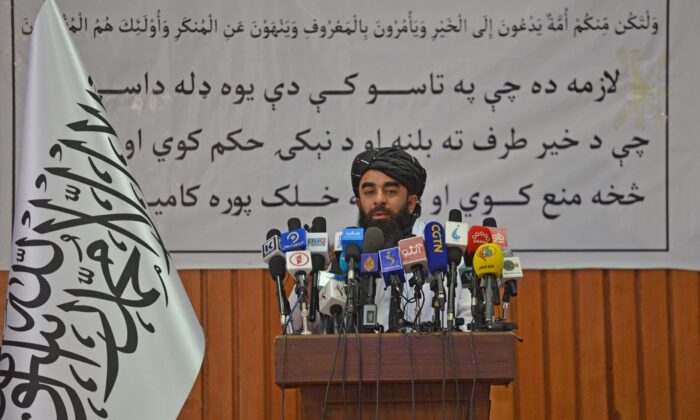 Taliban spokesman Zabihullah Mujahid speaks during a ceremony to announce the decree for Afghan women's dress code in Kabul, Afghanistan, on May 7, 2022. (Ahmad Sahel Arman/AFP via Getty Images)
Afghanistan

ISLAMABAD—The Taliban terrorist group has released several British citizens who were detained in Afghanistan after an agreement was reached between the two countries, Taliban and UK officials said Monday.

The detainees were released Sunday following a series of meetings between Afghan and British officials, said Zabihullah Mujahid, spokesman for the Taliban government, in a statement.

“A number of British nationals were released, who were arrested about six months ago for violating the laws and traditions of the Afghan people,” he said.

Mujahid didn’t say what laws the UK citizens had broken or elaborate on why they had been detained. The statement said all of them pledged to respect the laws of Afghanistan, the traditions and culture of the Afghan people and not to violate them again.

The identities of the British citizens were not released by either government but the Frontline Club, a journalists’ club in London that campaigned for former BBC cameraman Peter Jouvenal’s release, said he was among the five who were freed.

Former BBC journalist David Loyn also said in a tweet: “Peter Jouvenal has been released from captivity in Afghanistan after more than six months.

“His family have requested privacy at this time, and have expressed gratitude to the Foreign Office who have worked tirelessly to secure the release.”

A statement from the British government in February had said there were a number of British nationals in Taliban custody. Although the government refused to release their identities, Hassina Syed, Jouvenal’s wife, told The Associated Press that the former freelance cameraman turned businessman was taken on Dec. 13.

“We welcome and appreciate the release by the current administration of Afghanistan of five British nationals who were detained in Afghanistan,” said a statement Monday from Britain’s Foreign Office.

There was no report on the fate of an American citizen who was also detained by the Taliban. U.S. National Security Adviser Jake Sullivan told CNN’s “State of the Union” earlier this year that Washington was “actively working” to get the American released from Taliban custody. He refused to say more at the time, citing the “sensitivity of it.”

The British statement said the freed detainees had no role in the UK. government’s work in Afghanistan and traveled to the country against the UK government’s travel advice. “This was a mistake” it said.

“On behalf of the families of the British nationals, we express their apologies for any breach of Afghan culture, customs or laws, and offer their assurance of future good conduct,” the statement by the UK government added.

Jouvenal’s wife, Syed, an Afghan, had said her husband was in the country investigating business opportunities, including investment in lithium mining. Afghanistan is rich in lithium, a key component of energy-storage batteries. He was traveling alone and not associated with the other detainees, she said.

Jouvenal had worked as a freelance cameraman during the 1980s Soviet invasion in Afghanistan and followed the country through its many wars. He married Syed and they have three daughters.

Jouvenal, who speaks both Pashto and Dari, Afghanistan’s two official languages, had held several meetings with the Taliban’s mining ministry before being detained in December, Syed said, including with the minister. Until his detention, Syed said, Jouvenal had been careful to stay in regular contact with the Taliban authorities to ensure that they were aware of his activities and movements.

In the mid 2000s, Jouvenal owned and operated the Gandamak Restaurant and guesthouse in the Afghan capital, which had become well known among the many journalists who traveled to Afghanistan during the U.S.-led invasion that toppled the Taliban regime in 2001.

Since seizing power in mid-August last year, the Taliban have imposed harsh edicts in Afghanistan, harking back to their repressive rule during the late 1990s. They have restricted freedoms and rights of women, who are now barred from going to school beyond the sixth grade, and minorities. The country has plunged into an unprecedented crisis, hurtling toward an economic meltdown as famine and hunger loom.

The Taliban have made it clear that Afghans without proper documents would not be allowed to leave the country.

Syed said she feared her husband may have gotten caught up in a Taliban investigation into attempts to secretly transfer Afghan nationals out of the country.