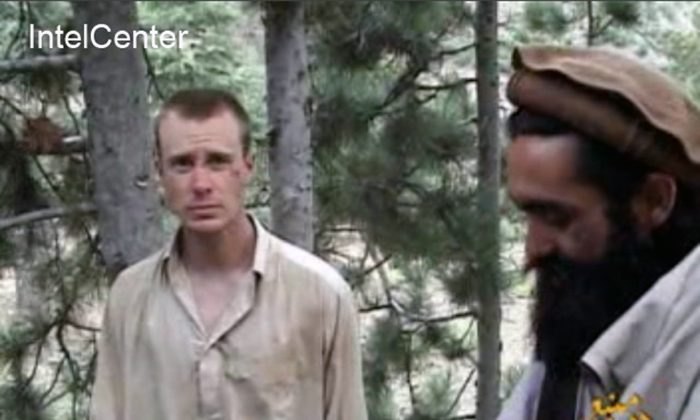 This file image provided by IntelCenter on Wednesday Dec. 8, 2010 shows a frame grab from a video released by the Taliban containing footage of a man believed to be Bowe Bergdahl. (AP Photo/IntelCenter, File)
Middle East

The Taliban made a prisoner offer on Thursday, involving a captive U.S. soldier held captive for four years.

KABUL, Afghanistan  — The Afghan Taliban are ready to free a U.S. soldier held captive since 2009 in exchange for five of their senior operatives imprisoned at Guantanamo Bay, a senior spokesman for the group said Thursday.

The offer to exchange U.S. Army Sgt. Bowe Bergdahl for the Afghan detainees came as an Afghan government spokesman said President Hamid Karzai is now willing to join planned peace talks with the Taliban — provided that the Taliban flag and nameplate are removed from the militant group’s newly opened political office in Doha, the capital of the Gulf state of Qatar. Karzai also wants a formal U.S. statement supporting the Afghan government.

Bergdahl, 27, of Hailey, Idaho, is the only known American soldier held captive from the Afghan war. He disappeared from his base in southeastern Afghanistan on June 30, 2009, and is believed held in Pakistan.

In an exclusive telephone interview with The Associated Press from his Doha office, Talibanspokesman Shaheen Suhail said on Thursday that Bergdahl “is, as far as I know, in good condition.”

Col. Tim Marsano with the Idaho National Guard said Bergdahl’s parents, Bob and Jani Bergdahl, plan to speak at an event honoring the soldier in Hailey on Saturday.

“They’re aware that the possibility of a transfer or exchange is on the table and they’re encouraged by it,” Marsano said.

Bergdahl’s parents earlier this month received a letter from their son through the International Committee of the Red Cross. They did not release details of the letter but renewed their plea for his release. The soldier’s captivity has been marked by only sporadic releases of videos and information about his whereabouts.

The prisoner exchange is the first item on the Taliban’s agenda before even opening peace talks, said Suhail, a top Taliban figure who served as first secretary at the Afghan Embassy in the Pakistani capital of Islamabad before the Taliban government’s ouster in 2001.

“First has to be the release of detainees,” Suhail said when asked about Bergdahl. “Yes. It would be an exchange. Then step by step, we want to build bridges of confidence to go forward.”

The reconciliation process with the Taliban — seen by most as the only way to end the nearly 12-year war — has been a long and bumpy one. It began nearly two years ago when the U.S. opened secret talks that were later scuttled by Karzai when he learned of them.

It was then that the U.S. and Taliban discussed prisoner exchanges and for a brief time it appeared that the five Guantanamo Bay prisoners would be released and sent to Doha to help further the peace process. But Karzai stepped in again and demanded they be returned to Afghanistan over Taliban objections.

Since then, the U.S. has been trying to jumpstart peace talks and the Taliban have made severaloffers — including sharing power in Kabul. The Taliban have also attended several international conferences and held meetings with representatives of about 30 countries.

The idea of freeing some of the Taliban’s most senior operatives has been controversial over fears they would simply return to the battlefield. Afghan and U.S. officials have said the Taliban being considered for any exchange deal are:

— Mohammad Fazl , a former Taliban chief of army staff and the deputy minister of defense.

— Abdul Haq Wasiq, former Taliban deputy minister of intelligence, who was in direct contact with supreme leader Mullah Mohammed Omar during the Taliban rule, according to military documents.

— Mullah Norullah Nuri , who has been described as one of the most significant former Talibanofficials held at Guantanamo. He was a senior Taliban commander in Mazar-e-Sharif and previously was a Taliban governor in two provinces in northern Afghanistan,

— Khairullah Khairkhwa, a former Taliban minister of the interior and military commander. According to military documents, he had direct ties to Mullah Omar and Osama bin Laden and was also a friend of Karzai.

— Mohammed Nabi, former chief of security for the Taliban in Qalat, the capital of the southern province of Zabul.

If the Taliban hold talks with American delegates in the next few days, they will be the first U.S.-Taliban talks in nearly 1½ years.

U.S. Secretary of State John Kerry was expected in Doha ahead of a conference there scheduled for Saturday on the Syrian civil war. He was not expected to meet with the Taliban although other U.S. officials might in coming days.

Prospective peace talks were again thrown into question Wednesday when Karzai became infuriated by the Taliban’s move to cast their new office in Doha as a rival embassy.

The Taliban held a ribbon-cutting ceremony Tuesday in which they hoisted their flag and a banner that evoked the name they used while in power more than a decade ago: “Political Office of the Islamic Emirate of Afghanistan.” Later, the Taliban replaced the sign to read simply: “Political office of the Taliban.”

At the ceremony, the Taliban welcomed dialogue with Washington but said their fighters would not stop fighting. Hours later, the group claimed responsibility for a rocket attack on Bagram Air Base outside the Afghan capital, Kabul, that killed four American service members.

The U.S. expectation had been that U.S.-Taliban talks would be followed several days later with direct talks between the Taliban and a Karzai peace delegation.

But on Wednesday, Karzai announced that his government would not participate, apparently also angered by the way Kabul had been sidelined in the U.S.-Taliban bid for rapprochement.

The Afghan president also suspended negotiations with the United States on a bilateral security agreement that would cover American troops who will remain behind after the final withdrawal of NATO combat troops at the end of 2014.

That left U.S. officials scrambling to save the talks, and Kerry spoke with Karzai in phone conversations in an effort to bring him back on board.

On Thursday, Karzai spokesman Fayeq Wahidi said the Afghan president is willing to join peace talks with the Taliban if the U.S. follows through with promises he said were made by Kerry over the phone.

Wahidi said Kerry promised Karzai that the Taliban flag and a nameplate with their former regime’s name would be removed and that the U.S. would issue a formal written statement supporting the Afghan government and making clear that the Taliban office would not be seen as an embassy or government-in-exile.

“If all those assurances and commitments the U.S. had given, if we are assured that they will be fully put in place on the issue of talks in Qatar,” Wahidi said, “we would see no problem in entering into talks with the Taliban in Qatar. “

A decision on whether to restart the U.S. security agreement talks would be made after those assurances, he added, referring further questions to the foreign ministry.

On Thursday, the “Islamic Emirate” nameplate had been removed from the Taliban office. The flagpole inside the compound was apparently shortened and the Taliban flag — dark Quranic script on a white background — was still flying but not visible from the street. Journalists gathered at the office shot images of the flag through the gaps in the walls.

The Taliban have long refused to talk to Karzai’s representatives but the opening of the office was seen as a first step toward those meetings.

“We want foreign troops to be pulled out of Afghanistan,” he added. “If there are troops in Afghanistan, then there will be a continuation of the war.”

Suhail indicated the Taliban could approve of American trainers and advisers for the Afghan troops, saying that “of course, there is cooperation between countries in other things. We need that cooperation.”

He said that once the Taliban concluded talks with the United States, they would participate in all-inclusive Afghan talks.

Suhail ruled out exclusive talks with Karzai’s High Peace Council, which has been a condition of the Afghan president, who previously said he wanted talks in Doha to be restricted to his representatives and the Taliban. Instead, the Taliban would talk with all Afghan groups, Suhail said.

“After we finish the phase of talking to the Americans, then we would start the internal phase … that would include all Afghans,” he said. “Having all groups involved will guarantee peace and stability.”