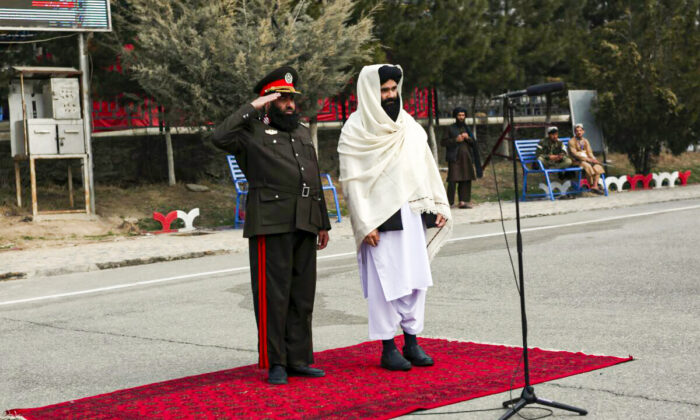 For the first time, photos showing Sirajuddin Haqqani’s face were published by official Taliban channels. That contrasted with an October appearance, when photos of the influential and reserved figure were blurred.

Haqqani was photographed attending the Saturday graduation ceremony of the first class to complete police training since the Taliban terrorist group assumed control of Afghanistan. Around 377 personnel, both male and female, graduated during the ceremony.

The event marked the first time Haqqani has given statements to the media since being named interior minister.

Haqqani said in a speech at the ceremony that Taliban security personnel who committed crimes against Afghan civilians were undergoing criminal proceedings. Civilians have complained of abuse by Taliban terrorists in house-to-house raids and at checkpoints.

In January a young woman was shot to death by a Taliban security police at a checkpoint. He was later arrested.

Haqqani said the Taliban were committed to the Doha peace agreement signed between the Taliban and the United States in February last year that brought an end to the war in Afghanistan.

The agreement requires the Taliban to prevent terrorist groups, like al-Qaeda, from using Afghanistan as a base to threaten international security.

In an apparent reference to international concerns over the Taliban’s willingness to grant access to education and employment for women, Haqqani said women can work and go to school in Taliban-controlled Afghanistan.

The Taliban have been pressing for the release of billions of dollars of Afghan central bank reserves frozen overseas as the country battles drought, cash shortfalls, and mass starvation.

Haqqani is wanted by the FBI and carries a $10 million bounty for information leading to his arrest.

He called on the thousands of Afghans who fled the country after the Taliban takeover to return.