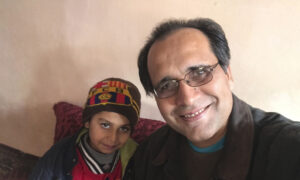 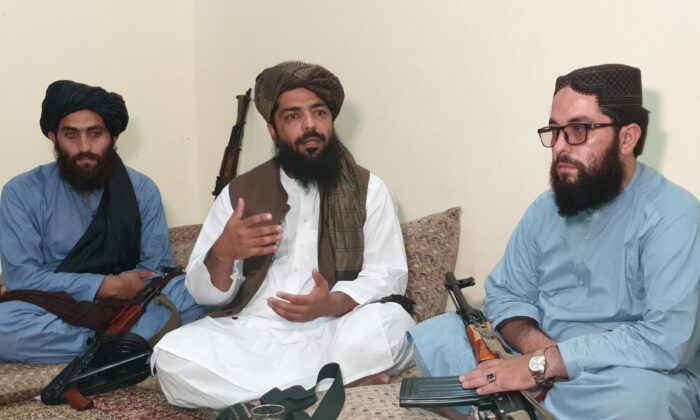 Waheedullah Hashimi (C), a senior Taliban commander, gestures as he speaks with Reuters during an interview at an undisclosed location near the Afghanistan–Pakistan border on Aug. 17, 2021. (Stringer/Reuters)
Asia & Pacific

Taliban Official: No Democracy in Afghanistan, Council Will Likely Rule

The Taliban terrorist group is considering using a council to govern Afghanistan after taking over the country, while leaving the movement’s supreme leader, Haibatullah Akhundzada, in overall charge.

Akhundzada would likely play a role above the head of the council, who would be akin to the country’s president, Taliban official Waheedullah Hashimi, who has access to the group’s decision-making, said in an interview near the Afghanistan–Pakistan border.

One of Akhundzada’s deputies could “play the role of ‘president,'” he added.

The power structure that Hashimi outlined would bear similarities to how Afghanistan was run the last time the Taliban was in power from 1996 to 2001. Then, supreme leader Mullah Omar remained in the shadows and left the day-to-day running of the country to a council.

The Taliban’s current supreme leader has three deputies: Mawlavi Yaqoob, son of Mullah Omar, Sirajuddin Haqqani, leader of the extremist Haqqani network, and Abdul Ghani Baradar, who heads the Taliban’s political office in Doha and is one of the founding members of the group.

The way the country will be governed is still being worked out, according to Hashimi. But he ruled out democracy.

“There will be no democratic system at all because it does not have any base in our country,” he said. “We will not discuss what type of political system should we apply in Afghanistan because it is clear. It is Sharia law and that is it.”

Sharia law is based on the Koran and is infamous for permitting execution for a range of actions, including defaming Islam, and harsh punishments for others, such as amputation for theft.

Under Sharia law, a husband can discipline his wife at will and prevent her from leaving the house without his permission. It’s also used to force women to don burkas, or clothing that covers all of their bodies except for their eyes.

Taliban officials have claimed they’ll form “an inclusive government” in response to demands from U.S. and international officials, but also said they would respect women’s rights only “within the bounds of Sharia law.”

The Taliban declared an Islamic Emirate of Afghanistan after taking over the country on Sunday, hearkening back to its rule between 1996 and 2001.

While in power then, the terrorist group banned women from working outside their homes and attending school. They also could not go out in public without a male escort and were forced to wear a burka.

As of now, women are being allowed to work and go to school.

The Taliban has claimed to be acting peacefully but has brutally put down multiple protests in Afghanistan in recent days, killing an undetermined number of people. The group has also allegedly been whipping and beating people in Kabul as thousands try to reach the U.S.-held airport to escape before America fully withdraws.

Afghan President Ashraf Ghani, meanwhile, who fled the country as the Taliban took over, said Thursday from exile in the United Arab Emirates that he left to prevent bloodshed.

“All my colleagues in the West told me that if I didn’t leave, things would be worse. I could have stayed and started a war, but I had a responsibility to my people, and I didn’t want to start a bloodbath like in Syria and Yemen,” he said.

“If I had stayed, I would have been executed,” he added.

Also Thursday, Afghanistan’s top peace official Abdullah Abdullah and Hamid Karzai, another former president, met with a delegation from the Haqqani network extremist group, a faction of the Taliban.