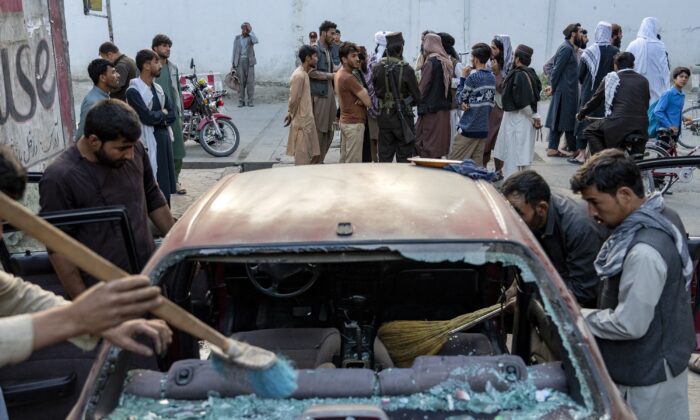 Afghan people clean a car that was damaged by an explosion in Kabul, Afghanistan, on Sept. 21, 2022. (Ebrahim Noroozi/AP Photo)
Afghanistan

ISLAMABAD—An explosion in Afghanistan’s capital has killed at least three people and wounded 13 others, a Taliban official said on Wednesday.

According to Khalid Zadran, the Taliban-appointed spokesman for the Kabul police chief, the blast occurred in a restaurant in the city’s western Dehmazang neighborhood. A team has arrived in the area to find out the cause of the blast, he added.

Police did not say if the blast was an accident or the result of an attack. Afghan cities are sometimes the target of the local ISIS terrorist group affiliate.

Residents and workers in the area said the restaurant was a popular place to eat for low-income workers and poor people because it was cheap.

One of those killed in the explosion was a teenager who worked in a photography shop in the area. His funeral took place on Wednesday, several hours after the incident.

An eyewitness, Hamid, said three of his friends were killed. “There were many casualties and we put them into a civilian vehicle and some other vehicles, and they were taken to Isteqlal hospital.”

Mohammad Mukhtar, the father of one of the victims, said his son had been having lunch at the restaurant.

“Five minutes later, we were informed that my son was martyred in the explosion. When I went to the hospital, I saw my son’s dead body. Who is responsible for it? Whom I can hold accountable for his loss?”

ISIS’s local affiliate, known as the ISIS in Khorasan Province, has increased attacks on mosques and minorities across the country since the Taliban seized power last August.

The group emerged in eastern Afghanistan in 2014 and is seen as the greatest security challenge facing the country’s new Taliban rulers. Following their takeover a year ago, the Taliban have launched a sweeping crackdown on ISIS.