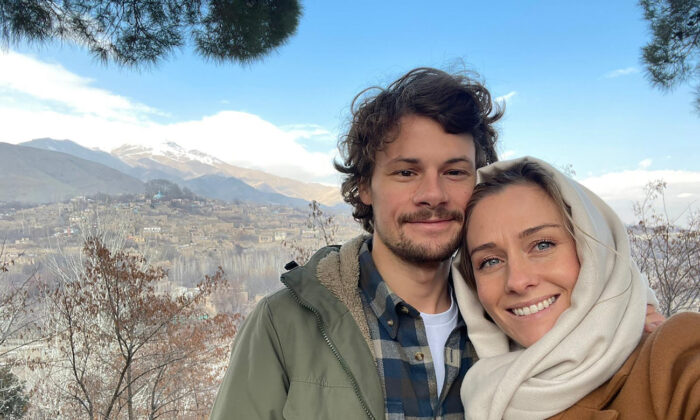 In this recent photo provided by Charlotte Bellis, Bellis poses in a selfie with her partner Jim Huylebroek in Kabul, Afghanistan. (Charlotte Bellis via AP)
Australia

A pregnant New Zealand (NZ) journalist said she had to turn to the Taliban for help after her country refused to grant her a travel exemption due to its strict COVID-19 border control.

In a column published in the New Zealand Herald on Saturday, Charlotte Bellis, a former journalist with Al Jazeera, said she discovered she was pregnant in Qatar, where sex outside marriage is illegal.

She then contacted the Taliban to ask if she would be welcome in Afghanistan as an unmarried pregnant woman as it was the only place she and her partner, Jim Huylebroek, had visas to live.

“We’re happy for you, you can come and you won’t have a problem,” Bellis quoted the Taliban officials as saying in response to her request. “They also said, ‘Don’t worry. Everything will be fine.’”

“When the Taliban offers you— a pregnant, unmarried woman—safe haven, you know your situation is messed up.”

Bellis said she had sent 59 documents to New Zealand authorities in Afghanistan but they deactivated her application for an emergency return. The reasons were the couples’ travel dates were “more than 14 days out” and Bellis failed to prove she had a time-critical scheduled medical treatment in New Zealand and that she cannot get the same treatment where she was, which, in this case, was Afghanistan.
“I wasn’t triggered by the disappointment and uncertainty, but by the breach of trust. That in my time of need, the New Zealand Government said you’re not welcome here,” Bellis wrote.

“I thought back to August, and how brutally ironic it was, that I had asked the Taliban what they would do to ensure the rights of women and girls. And now, I am asking the same question of my own government.”

After going public with her situation and preparing a legal response, Bellis said she had received an “unsolicited” email from the NZ authority which said her rejected application was under review.

“I understand she wanted to return on a specific date and that officials reached out to her for more information shortly after looking at her application,” he told reporters on Monday.

“The emergency allocation criteria includes a requirement to travel to New Zealand within the next 14 days. Ms. Bellis indicated she did not intend to travel until the end of February and has been encouraged by MIQ to consider moving her plans forward.”

Hipkins noted officials have also invited the journalist to apply for another emergency category, but Bellis said it requires her to apply in a location or a situation where there was a serious risk to her safety.

“First it was ‘we denied you because it’s more than 14 days.’Then it was ‘you don’t meet a threshold for medical stuff, now it’s something else. Why so many excuses and clauses? You have all the information,” she told the RNZ.

Meanwhile, Head of MIQ Chris Bunny said the MIQ is also “under pressure like never before” and is “experiencing very high volumes of emergency allocation requests due to widespread travel disruption around the world.”

“All applications for emergency allocations of a MIQ voucher are assessed case-by-case, there is no preferential treatment—it is a fair and consistent process,” he said.

The controversy comes as New Zealand’s state-run quarantine system faces heightened criticism as Kiwis struggle to return to their country through the MIQ lottery or on emergency grounds.

New Zealand’s National Party has recently reiterated their call for the Government to immediately end its MIQ requirement for vaccinated Kiwis stranded offshore.

“The reality is, the risk has changed. If you don’t have a set of responses that change to the environment you’re in… The risk can go up or down, it’s about risk management, essentially,” National leader Christopher Luxon said on Tuesday.