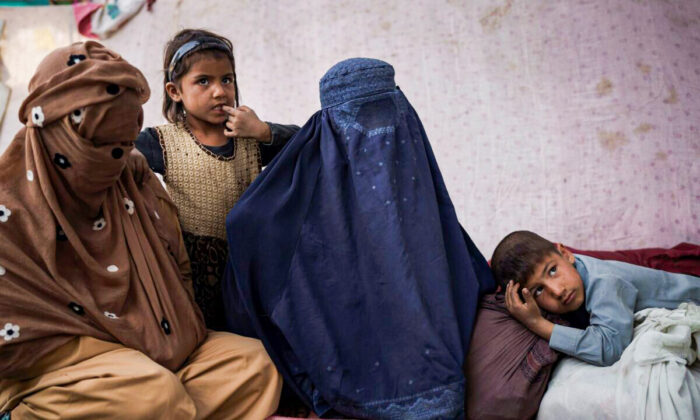 Malalai (C) from Kunduz province, sits with her children at a camp for internally displaced people as they wait for a bus to return home, in Kabul, Afghanistan, on Oct. 9, 2021. (Felipe Dana/AP Photo)
Afghanistan

The Taliban said on Sunday that it will no longer allow further evacuations of Afghans, and that women will be barred from traveling abroad without a male chaperone.

Taliban spokesman Zabihullah Mujahid said that Afghans will not be allowed to leave the country without a clear destination and valid reasons, citing reports of Afghans living in bad conditions in camps abroad, Kabul-based TOLOnews reported.

As for Afghan women, Mujahid claimed that Sharia law forbids women from traveling abroad without the presence of a male guardian.

The Taliban has not outlined what it considers are valid reasons to leave the country.

A U.S. State Department spokesperson said on Monday that they were engaging with the Taliban, asking them to live up to their prior commitments of respecting human rights, which include freedom of travel.

“We have seen the Taliban statements reported in the press and have raised our concerns with the Taliban,” the spokesperson said. “Our ability to facilitate relocation for our Afghan allies depends on the Taliban living up to its commitment of free passage.”

Mujahid said the Taliban’s travel restrictions would apply to Afghans who worked with the North Atlantic Treaty Organization (NATO) and American forces, but did not elaborate under what, if any, circumstances they would be able to evacuate.

The announcement came as the Taliban conducted a widespread house-to-house search operation in Kabul and other Afghan cities, which Mujahid described as “clearing operations” aimed at apprehending robbers and kidnappers. The searches come amid fears of political persecution by the Taliban of those who supported the former government, and other political opponents.

He said that the operations resulted in the seizing of weapons and ammunition, as well as the arrest of nine kidnappers and 53 robbers. Mujahid said that women were also involved in the searches and that only “suspected areas” were searched.

A resident of Kabul told TOLOnews that about 10 to 15 individuals stormed into his house unannounced and checked everywhere in the house.

Andreas von Brandt, the European Union’s ambassador to Afghanistan, called on the Taliban to immediately end “the intimidations, house searches, arrests, and violence against members of different ethnic groups and women,” calling such actions “crimes.”

“Despite Putin’s war, we are watching you,” Brandt warned on Twitter on Sunday.

The travel ban also violates a key requirement for the Taliban if it wants the United States to lift sanctions and recognize its government.

The Taliban seized control of Afghanistan in August last year when the United States withdrew its forces, resulting in more than 120,000 people fleeing the country.