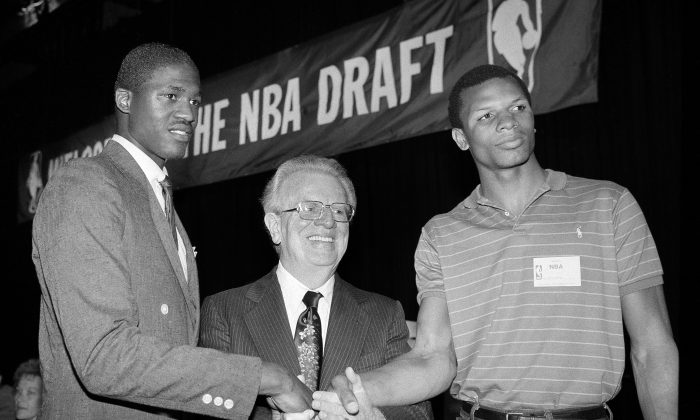 Dominique Wilkins, left, of the University of Georgia and Terry Cummings, right, of the DePaul University, join National Basketball Association Commissioner Larry O'Brien Tuesday, June 29, 1982 in New York after they were chosen in the NBA Draft. Wilkins, the third pick overall, went to the Utah Jazz and Cummings, the second pick in the first round of the draft, will go to the San Diego Clippers. (AP Photo/Marty Lederhandler)
12- OBSOLETE

We are at that time of year again. The NFL draft is finished, and the NBA draft has next. The NBA draft is all the rage. Prospects are dissected, analyzed, and compared to heroes of yesteryear. There is the pre-draft camp, the endless talk show hustle as well as fantasy drafts. Preceded by hype, hope and hoopla, the NBA Draft finally arrives with a cast of hundreds of personalities, nationally televised hour after hour. And then there is the endless post-draft commentary.

Once upon a time things were quite different in a simpler world and a smaller NBA. The first draft in 1947 saw first-round selections made by Pittsburgh, Boston, Providence, New York, Philadelphia, St. Louis, Chicago, Washington and Baltimore. No name from that first-round faraway time (aside from Knicks draftee Walt Dropo, who went on to a distinguished Major League baseball career) had any kind of real basketball impact.

The records from that primitive time are so shrouded in a time warp that a couple of the players drafted in ’47 like Bob Alemeida and George Petrovick have a question mark next to their name signifying a lack of information as to the college they played for.

A few non-first-round players went on to make a name for themselves in pro ball like Andy Phillip out of Illinois, Jim Pollard from Stanford, Bob Kurland of Oklahoma A&M, and Red Rocha who had played at Oregon State.

A footnote to NBA history is Tony Lavelli of Yale, taken by Boston in the 1949 Draft. He went on to play the accordion for the Celtics at half time, sometimes. But contrary to rumors, his musical skill was not one of the reasons for Boston drafting him.

The 1950 Draft went 10 rounds for some teams and 12 for others, as a few teams lost interest. Territorial picks were sometimes much fought over and debated. The exclusive right to draft a player who came from a team’s geographical region gave Philadelphia the legendary Paul Arizin in 1950.

A couple of others who went on to fame and glory were picked in that draft: Bud Grant (NFL) by Minneapolis and Bob Cousy by Tri-Cities.

The 1951 NBA Draft lasted 12 rounds, but most teams stopped picking by then.   The First Round went this way:

*The pick of Skoog was a Territorial one.

In the sixth round, the New York Knicks plucked Al McGuire from St. John’s. The last player picked was John Burke of Springfield, Massachusetts by Baltimore in the 12th round. By 1966, the territorial selections were eliminated. A year later, the New York Knicks used their fifth pick to get Walt Frazier and their 17th to obtain Phil Jackson.

In the ensuing years, all kinds of marquee players and also-rans have made their way onto NBA rosters through the draft. In my opinion, the 1970 and 1981 NBA Drafts rank among the all-time best yielding bumper crops of players.

Who knows what the NBA Draft 2015 has in store?