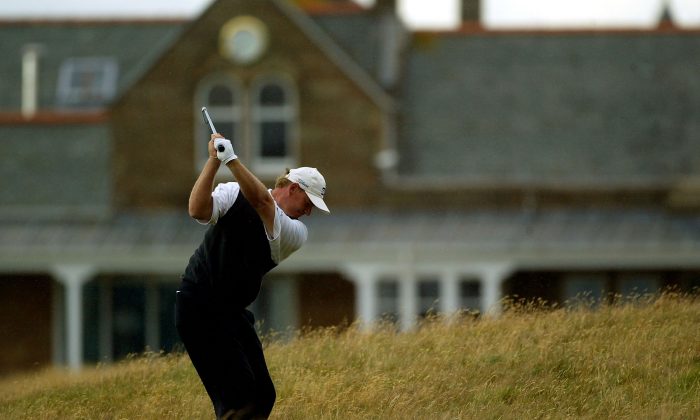 Ernie Els of South Africa plays his approach shot to the 18th green during the third round of the 133rd Open Championship at the Royal Troon Golf Club on July 17, 2004 in Troon, Scotland. (Warren Little/Getty Images)
Golf

TROON, SCOOTLAND—The 145th Open Championship will be played for the 9th time at Royal Troon and if there’s anything that stands apart at Royal Troon is how the course—or should I say the two nines—play so differently. Troon is a prototypical links course: the first half goes out in a relatively straight line, the other half follows similarly in the return to the clubhouse. The main impactor is the varying nature of the wind: at times it can be soft and welcoming, at other times the ferocious nature can be as vicious as any venue used for The Open.

Troon has always been a men’s only club, but given the fanfare tied to the recent decision by The Honourable Company of Edinburgh Golfers at Muirfield in continuing to refuse women as members, the probability is that Troon will opt to include women in order to be maintained for consideration for future Opens by the R&A.

Located 35 miles southwest of Glasgow, Troon hugs a rugged curve of links land that borders the Firth of Clyde and the Isle of Arran. The course will play 7,190 yards to a par of 71.

The players who come to Troon will quickly realize the links is about making the most of opportunities. The opening nine holes generally plays with a helping wind and there are numerous birdie holes. In fact, getting off to a quick start is a necessity in order to avoid making up ground later in the round which can prove extremely difficult.

The past winners at Troon have been a mix bag of renown stars such as Bobby Locke, Arnold Palmer and Tom Watson. Palmer’s win in 1962 was noteworthy in that he set the then Championship record with a 276 score pushing him to a six-stroke win. At other times Troon has brought to the surface names the global golf audience may not have truly known with the likes of Mark Calcavecchia, Justin Leonard and Todd Hamilton in the last three Opens in ’89, ’97 and ’04.

The outward half also features The Open’s shortest hole—the Postage Stamp 8th which can maddening given its 123 yards and sliver of a putting surface. But the teeth of Troon takes a serious turn when the players commence the back nine in making the long trek back to the clubhouse with the long 10th leading the way.

The inward half plays 3,745 yards and there are no less than five par-4’s in excess of 450 yards. The 11th—a devilish hole of 482 yards—is especially demanding with gorse and a rail road hanging tight to the right and causing a possible out-of-bounds situation for both the tee shot and approach. Players who have gotten off to a fast start can hit a definitive major bumpy road with the series of holes that take them to the round’s ultimate conclusion with the 458-yard finale.

World class players Greg Norman and Ernie Els had The Claret Jug within their sights in the ’89 and ’04 events. Both made critical errors that allowed Calcavecchia and Hamilton respectively to claim their sole major titles.

This year’s championship will have plenty of interesting storylines. Can Jason Day continue his ascendancy as the game’s dominant player? Can U.S. Open and WGC-Bridgestone winner Dustin Johnson make it three consecutive wins and his first Open Championship? Can Rory McIlroy shake off a poorly-played U.S. Open performance at Oakmont and recapture the form he showed in winning the “14 Open at Royal Liverpool? Is Jordan Spieth able to shake off the up/down efforts he has shown in ’16 and go one step beyond what he did so well at The Old Course last year—finishing one shot of the three-way playoff won by American Zach Johnson. Can England’s Lee Westwood—at 43 now—finally break through and win his first major. Westwood has had five Open top-10s including a fourth-place-finish at Troon.

Troon has not been seen by a range of the younger crop of players who did not compete in the last event in ’04, so getting familiar with the course will be a major task. As with any links course being able to adjust as the moment commands will ultimately play a major role in shaping how any competitor will fare.

At this year’s event the R&A will have a new chief executive: Martin Slumbers. The 56-year-old took over from Peter Dawson. The R&A has made major strides in elevating The Open to a level far beyond what it was when Dawson took the reins from former leader Michael Bonallack in 1999.

Troon is not as beloved as other more noted Open venues such as The Old Course at St. Andrews or Muirfield but it is formidable layout demanding nothing less than stellar play over the final run of holes. Recent weather in western Scotland has been wet and often dreary and forecast highs look to be in the very low 60’s for the balance of the event. As golf’s only major championship played outside the USA, The Open Championship will test players to improvise as needed. Bad bounces, shifting winds and varying weather conditions are elements the players will need to adjust to as called upon. There’s also the element of luck of the draw to when players are scheduled to tee off. It is not uncommon for those in the morning or afternoon series of tee times to have vastly different weather conditions when playing. Scotland is the home of golf and Troon is sure to once again make its mark as the game’s oldest major event.