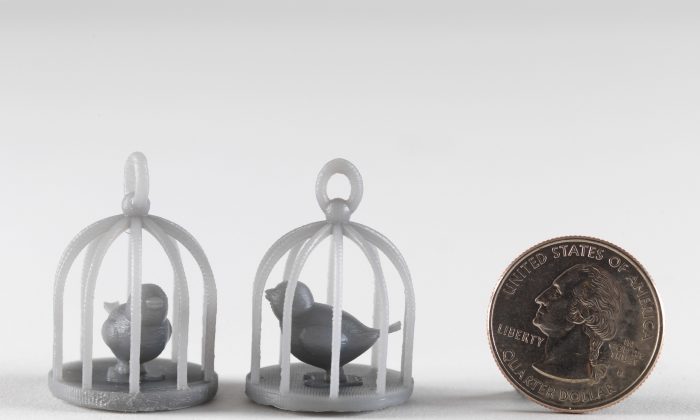 3D printing is reaching new levels of resolution, and also affordability for hobbyists. These birdcage earrings are an example of 3D printing by Fomlabs' Form 1 printer. (Courtesy of Formlabs)
Tech

Taking the Next Step in Consumer 3D Printing

Everyone has heard of 3D printing and the range of possibilities the technology provides, from creating an artificial duck’s foot, a human lung, to a ring replacing Boston’s public transportation card.

The medical uses are uncontested, and with cheaper consumer-grade printers so readily available, people had high hopes for 3D printing outside academic uses. However, the difficulties in creating the image of something to print plus the justification of spending maybe $1,000 on a “figurine machine” has kept it from becoming a household item.

But the interest has not gone away.

3D Systems, the founder of 3D-printing, recently released the Sense scanner, which lets people scan anything to print—even if they don’t have a 3D printer.

Users with a Cube, the company’s consumer-grade printer, can print the images themselves, or send it to Cubify.com and order the model of their scan to be delivered.

Other 3D printing services like this exist as well, like Sculpteo and Shapeways, which require you to send a model of the object you want printed to be delivered back.

But the idea behind Sense is to have consumers look at 3D printing the way they would family photos, according to a company spokesperson. Weddings, birthdays, and graduations are memories you want to keep, and the company envisions it should be as easy to capture a 3D figure of your loved ones as it is to take a picture.

ReconstructMe and Skanect are also programs aimed at getting people to print 3D models of themselves and friends, but require large equipment for the scanning process. Sense is a relatively compact, handheld device that can be connected to a mobile device to use—but getting people to pose for 3D scanning might still take some getting used to.

“Consumer-grade” itself still caters to a wide range of users.

MAKE Magazine is releasing a special edition this month, with reviews of 23 different 3D printers priced from about $300 to $3,000.

“This is rapidly expanding and growing,” said Anna Kaziunas France, digital fabrication editor of MAKE. The addition of printers below $1,000 is already a huge game changer, she said.

The team split up user types into three main categories: makers, tinkerers, and designers. Makers are users who want to create physical objects, and just want to get the job done.

Tinkerers are more interested in tweaking and building machines and the hardware itself than design; maybe students or educators, and hobbyists.

Designers are more accustomed to drafting designs in software but may not have experience or much interest in creating the physical objects themselves, such as architects and engineers.

The printers were evaluated on finish, such as how the printer dealt with fine details, how the slicer handled curves, the extruder’s ability to create layers, any “ringing” or repetition of features caused by vibrations, and more. Consideration was also given to things like budget and how easy it was to set up and use a machine straight out of a box.